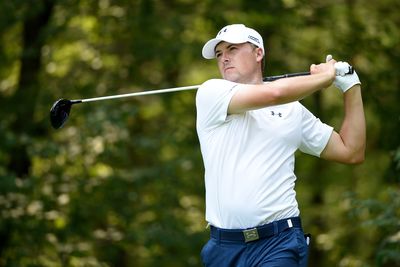 The PGA Tour’s only scheduled Monday finish is the Deutsche Bank Championship, the annual Labor Day tradition in Boston. So this is the one week of the year without golf on Thursday morning as everything gets pushed back a day and the best in the world tee it up Friday in what’s settled in nicely as the second leg of the FedExCup.

The top 100 in the FedExCup standings remain for this second of four postseason events. There were 25 playoffs participants weeded out last week in New Jersey and there will be another 30 whose season ends this weekend in Boston. With 100 still in the field, there will be a cut made to the top 70 and ties on Saturday night after 36 holes.

The swing up to TPC Boston also means that CBS’ golf coverage for the year has ended, ceding the floor to football on the weekends. NBC, which has less football conflicts during the day on weekends, takes over for the final three postseason events. Their Comcast sister network, Golf Channel, will split the duties and have their usual coverage for the first two rounds and then early round coverage for the last two days.

Golf Channel, however, will not be live on Friday until 2:30 p.m. and that’s unfortunate for them because Jordan Spieth, Jason Day, and Rory McIlroy will all be done with their opening round by then. As is FedExCup custom, the tee times are sorted by players’ positioning in the standings. That means Day, Spieth, and Bubba Watson will all be out in the same group for the second straight week.

It didn’t go so well for Spieth last week at The Barclays, where he posted his worst round of the year and missed his first cut since early May. The MC combined with Day’s win moved the Aussie into the top spot in the standings. After switching to some new irons last week, Spieth has put his old set back in the bag this week with an eye on regaining his perch as No. 1 in the points race.

Spieth also lost his No. 1 world ranking last week to the idle McIlroy. His reign atop the world rankings lasted just two weeks after his solo 2nd place finish at the PGA knocked Rory from the top spot. McIlroy is back on site again this week after sitting out the postseason opener to rest his ankle. The PGA obviously carried more weight and importance for Rory so he felt comfortable teeing it up there and passing on a FedExCup event. He had the points to be safely qualified for the first three events. Rory and his regained No. 1 ranking will tee it up at 9:06 a.m. ET.

McIlroy and that trio of Spieth, Day, and Bubba will all be featured in a morning marquee groups stream on PGA Tour Live. That’s the Tour’s nascent paywalled subscription service and this will be one of their more attractive offerings for these early round, early morning marquee groups coverage before the TV broadcasts go live.

In the past, these featured groups streams at these bigger events, like the FedExCup, were free as a part of their “PGA Tour Live At” service. Now they’re part of this subscription service started in conjunction with MLB Advanced Media at the beginning of August. The quality of the stream is great and the coverage is comprehensive, but there is that new price point; these FedExCup marquee groups will be a nice barometer for how well the new service is doing heading into next season, when it settles in for the full PGA Tour schedule.

Once the featured groups finish (around 2 p.m.), the stream will follow the bigger names and stories on the course until 3 p.m., when it switches to featured holes coverage. In the afternoon, there will also be the typical simulcast stream of Golf Channel’s TV broadcast up and running. Here are all your media and streaming options for Friday’s opening round from TPC Boston:

LatinoAthlete Staff - August 26, 2015
0
LAS VEGAS — On the night of UFC 189, when Conor McGregor was fighting Chad Mendes for the UFC interim championship in Las Vegas,...