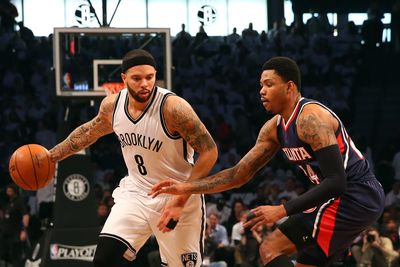 Dallas has found a point guard.

Deron Williams is officially a Maverick after the former Brooklyn Nets point guard signed with Dallas on Tuesday. According to Marc Stein of ESPN, the deal is worth $10 million over two years with the second season containing a player option. The deal comes only a few days after Williams and the Nets agreed to a buyout.

Williams is expected to received $25-30 million from Brooklyn after the buyout, according to ESPN’s Marc Stein. He had about $43 million remaining on the final two years of his contract.

The buyout lets Brooklyn avoid what would have been a massive luxury tax bill during a season when the team isn’t expected to be a contender in the Eastern Conference. It also allows Williams to get a fresh start after some up-and-down years with the Nets, and gives the Mavericks a new answer in the backcourt after Rajon Rondo and Monta Ellis departed in free agency.

Williams averaged 13 points, 6.6 assists and 3.5 rebounds per game in Brooklyn last season. His scoring averaged has decreased each of the last five years as he has battled foot and ankle injuries since coming to the Nets from Utah.