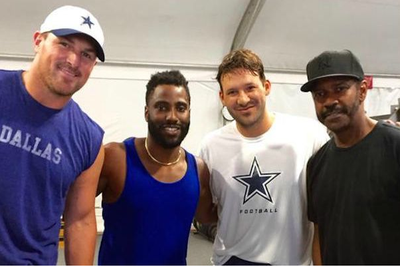 Denzel Washington, star of Remember The Titans, one of the most influential football movies of our time, visited the Dallas Cowboys practice on Saturday.

Most surprisingly however, it wasn’t Denzel with the hook up. Instead it was his son who pulled it all together. J.D Washington, who stars as Ricky Jerret in HBO’s Ballers, once played with Cowboys fullback Tyler Clutts in the UFL. Who knew?

Thanks 2 my man JD Washington 4 coming out 2 practice today w/ his pops & speaking 2 our team. Check him out on @BallersHBO @dallascowboys

Denzel spoke with the Cowboys before practice and was quick to say he’s only got love for the Cowboys.

Oh, and in case you’re wondering what actual NFL players think about Ballers? Clutts was all for it.

“I think it’s extreme but there’s a lot of truth. It’s a good show. I’m really happy that he got it.”

Here’s a glimpse in case you haven’t seen it. Or, decide for yourself.

Michael Jordan, Marshawn Lynch and a sketch of Tom Brady are...

LatinoAthlete Staff - August 27, 2015
0
Not satisfied with the current options for 2016? Well, look no further! Move over Hillary Clinton and Donald Trump, there are...