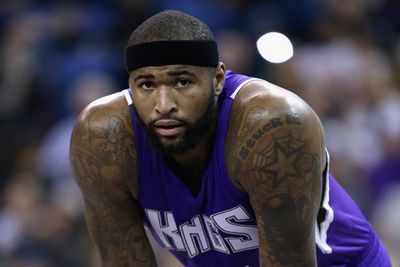 DeMarcus Cousins is back on the block, as reports indicate that George Karl wants Cousins gone. But Kings ownership is still adamant they will not trade their star.

Late Monday, Yahoo!’s Adrian Wojnarowski broke the news that Kings coach George Karl has been trying hard to get DeMarcus Cousins traded. Cousins is a spectacular presence on Twitter, offering up a sparse feed that bangs every single time. His response to the report about his coach was no exception.

That would be an emoji representation of a snake in the grass. That knocks. Hard. And especially so because it’s not the first or second time an NBA star has made this accusation toward Karl.

Back in 2011, the Karl-coached Denver Nuggets finally traded Carmelo Anthony to the New York Knicks, ending a long saga that actually earned its own title (The Melodrama). Almost immediately, Karl got passive-aggressive in the media, calling into question Anthony’s defensive effort and wondering if it’d improve in New York.

WHEN THE GRASS IS CUT THE SNAKES WILL SHOW.

In 2013, Karl declared that Andre Iguodala, his one-time star, had been a “mole” for the Warriors in the teams’ playoff series. Months later and seemingly at random, Iguodala dropped this tweet.

When the grass is cut…

We’re not sure why, but Nuggets point guard Ty Lawson once tweeted about snakes.

Tooo many snakes in the field

To many snakes in the grass got to get the lawn kut!

And now we have DeMarcus Cousins simplifying it down to a three-character tweet. I’m sensing a pattern.

SB Nation presents: How to construct an NBA champion

LatinoAthlete Staff - July 10, 2015
0
The Cowboys defensive end is eligible to return in Week 5. Greg Hardy's 10-game suspension for violating the NFL's personal conduct policy has been...