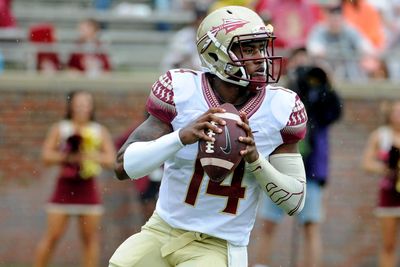 After video surfaced showing the Seminole QB involved in a brutal incident, Florida State has now dismissed him from the team.

Florida State dismissed freshman quarterback De’Andre Johnson on Monday night. The dismissal came after the State Attorney’s Office in Tallahassee, Fla., released a surveillance video showing Johnson punching a female student at a bar in May. Johnson was already suspended indefinitely following the accusations but now the university has gone a step further, with FSU head coach Jimbo Fisher announcing Johnson has been dismissed.

Johnson currently faces a misdemeanor battery charge in connection with the incident. According to Tomahawk Nation and others, the victim suffered multiple injuries to her face. Johnson turned himself in before being released on bond. In a statement, Johnson’s defense attorney Jose Baez said that Johnson is “extremely embarrassed and offers his heartfelt apologies to everyone.”

Rated a three-star prospect by the 247Sports Composite, Johnson sought to compete for the starting quarterback job left open after Jameis Winston departed for the NFL. He was expected to battle with Notre Dame transfer Everett Golson and Winston’s main backup from the previous season, Sean Maguire.

Cardale Jones tried to tweet his way into a date with...

LatinoAthlete Staff - July 16, 2015
0
If there had been a Best Tweeter ESPY, Jones would have won in a landslide. Cardale Jones is prolific on Twitter. From not...