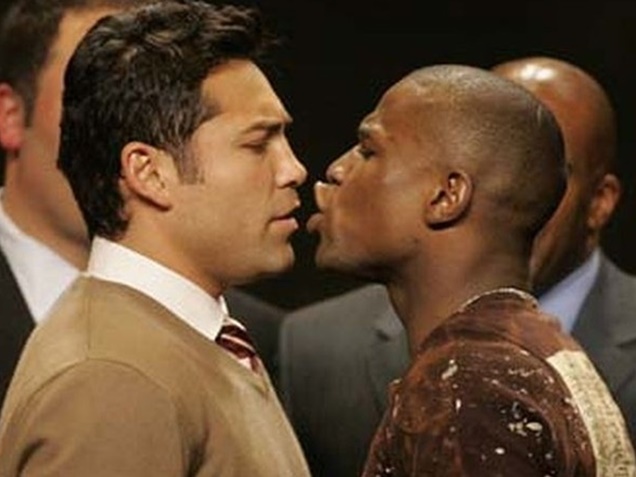 Flip and see what Oscar De La Hoya is saying…

LatinoAtlete.com has to laugh a little at this one, because Mayweather said he’ll only come out of retirement for McGregor, but De La Hoya believes otherwise.

Bottom line, De La Hoya thinks Mayweather vs McGregor is a disrespectful fight to both the boxing community and the UFC community.

Somehow, Golden Boy Promotions CEO Oscar De La Hoya feels that Mayweather would be ready to come out of retirement to fight a rematch with Saul Canelo Alvarez at 160.

Mayweather already beat Canelo by a 12 round majority decision 4 years ago in 2013, so why does he want a rematch?

“I would never concede their biggest start fighting inside the ring with Floyd because obviously he would get embarrassed . Floyd would out-box him easily. It would be disastrous for the UFC. So I don; see it happening. Why not face Canelo at 160.”

What the Golden Boy Promotions CEO doesn’t seem to get is that Mayweather hasn’t shown any interest in taking any risky fights since his win over Manny Pacquiao in 2015.

LatinoAthlete Staff - July 9, 2015
0
DeAndre Jordan's free agency was filled with rumors that the reason he was considering leaving the Clippers was because he didn't like...