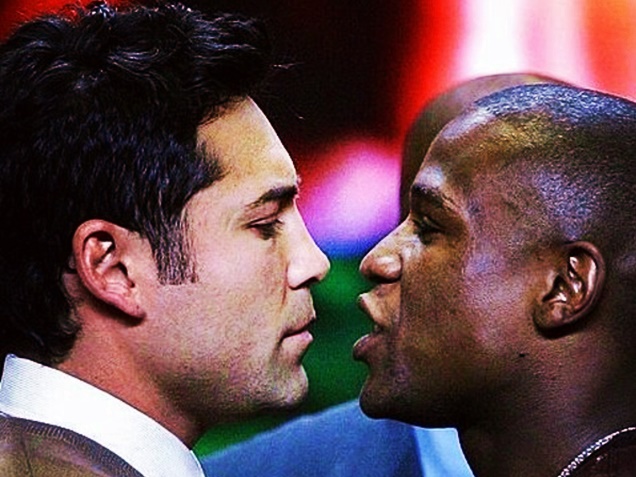 Back in 2007 when Oscar De La Hoya went up against Floyd Mayweather he learned quickly that he wasn’t a match for the Champion boxer. He lost by split decision.

Now, Oscar De La Hoya is weighing in on the upcoming Conor McGregor vs Floyd Mayweather. Read on…

LatinoAthlete.com hass just hear that Oscar De La Hoya feels that Conor McGregor is not a match for Floyd Mayweather.

Oscar De La Hoya goes on to say that the only way Conor McGregor can beat Floyd Mayweather is with a flying kick to the head, but that will jeopardize his UFC career. Not only that he will immediately be disqualified and lose the fight.

Oscar also had this to say when he was stopped on the street by camera paps stating if he couldn’t beat Floyd during his own boxing heyday, McGregor has no real shot.

Despite being against this fight from the beginning the Golden Boy Promotions CEO gave the UFC Champion some advice on how to fight Floyd.

What was, it, duck and move?

What do you think about McGregor vs Mayweather? We believe Conor is going to lose miserably to Floyd. No offense, but we hop Floyd KOs Conor in the first round and shuts him up!

UFC’s Nick Diaz Sentenced to 2 Days in Jail for DUI...