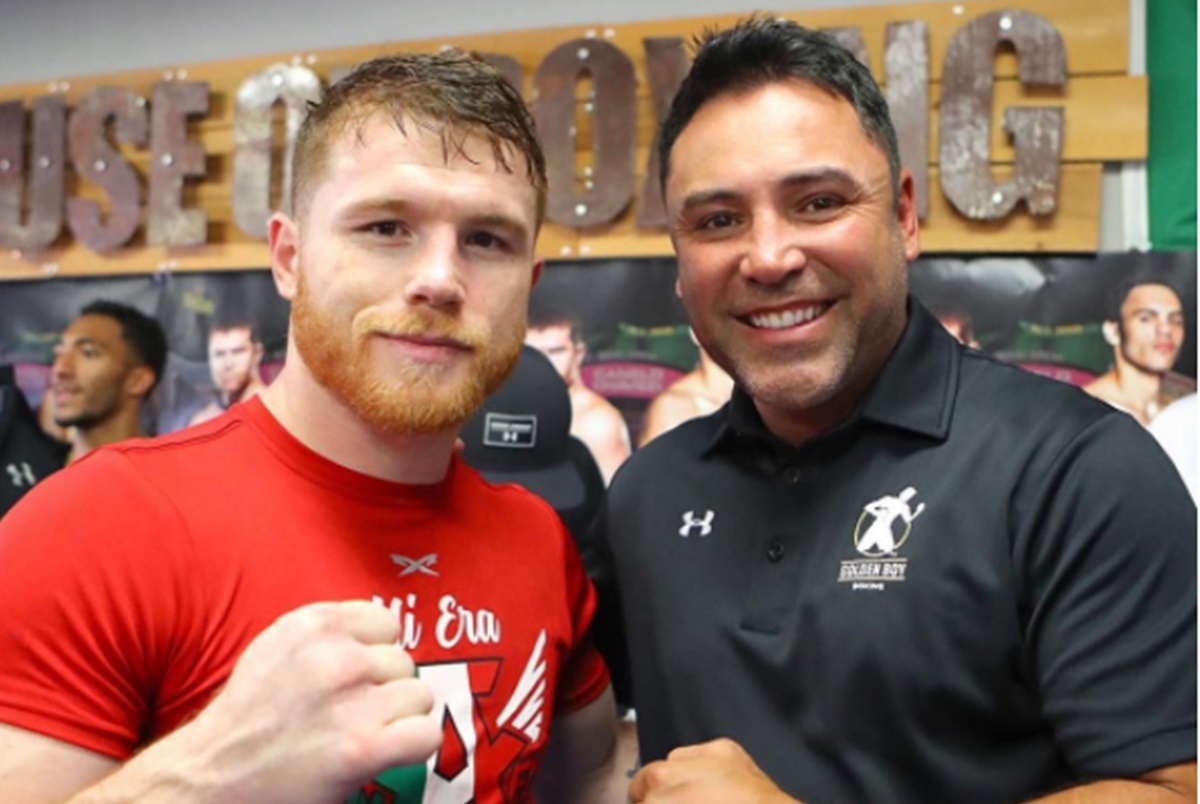 We might want to start calling Golden Boy Promotions CEO Oscar De La Hoya the hype man of the boxing world since he knows how to get it started!

Oscar De La Hoya is at it again about the Canelo vs GGG fight!

LatinoAthlete.com is hearing that Oscar De La Hoya is already making predictions that the September 16th mega-fight between Saul “Canelo” Alvarez (49-1-1, 34 KOs) and Gennady “GGG” Golovkin 37-0, 33 KOs) will out do Canelo vs Chavez Jr.

Who will win the Canelo vs GGG fight?

Oscar De La Hoya might sound overly ambitious about his predictions for the number of buy rates, but he sounds like he’s on the money.

This is a make it or break it fight for Canelo and if he can carry on the title as the “Pride of Mexico.” There’s tremendous interest in the Canelo-Golovkin fight since no one has seen since the 2015 contest between Floyd Mayweather Jr. and Manny Pacquiao. Mayweather vs Pacquiao brought in 4.6 million PPV buys on HBO/Showtime, so this is why Oscar De La Hoya is predicting big numbers to hit above $3 million.

There hasn’t been a fight nearly as intriguing as the Canelo-GGG fight since Mayweather-Pacquiao. You can expect PPV buys to be through the roof for the Canelo-Golovkin fight, this according to Oscar. Plus the Golden Boy Promotions CEO feels that the prediction he is putting in the universe is definitely achievable given the right level of marketing of the fight. Also note neither Canelo, 26, or Golovkin, 35, have any injuries like Pacquiao did when fighting Mayweather. This time both fighters are in their prime.

”With Canelo-Chavez selling over a million homes, we’re expecting close to 3 million with Golovkin and Canelo in September.  These are the types of fights that bring boxing back, and that’s exactly my mission – is to bring boxing back, bring back that excitement that people used to live for when watching boxing. So little by little we’re chipping that block and hopefully making it happen.”

He also said what two cities the venue for the Canelo vs. Golovkin fight could be in:

“It’s between Dallas and Las Vegas so I have my meetings set already, all this week and next week, and hopefully I can have an answer for you in a few days.”

Are you excited for the Canelo vs GGG fight? Do you agree with Oscar De La Hoya?