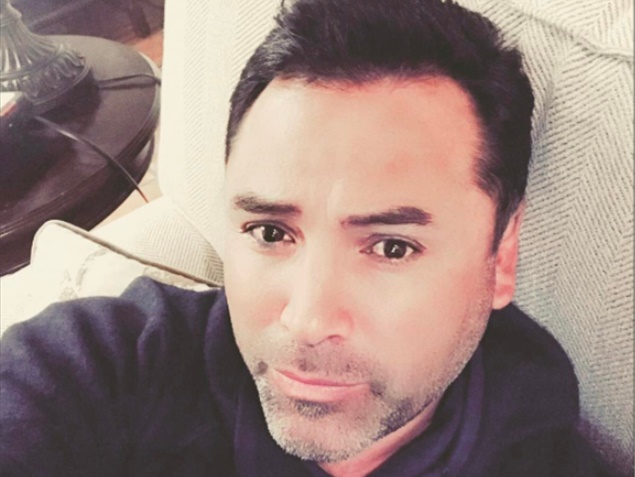 Oscar De La Hoya is making a valiant effort to get his point acrross about the “joke of a fight” between legend Floyd Mayweather and UFC lightweight champion Conor McGregor.

Oscar De La Hoya is fearing the worst about the fight as it may have negative repercussions if it actually happens. Read on…

As the year comes to the half way mark LatinoAthlete.com has noticed that the UFC and McGregor reportedly is agreeing to terms and Mayweather offering more positive statements about the possible fight day by day.

This sounds cool, but in Oscar De La Hoya‘s this is all bad for the boxing world. Boxing has its own set of rules. The UFC was created because they could not fight by boxing rules and now this?

The Golden Boy Promotions head honcho who is promoting the huge Canelo Alvarez vs. Gennady Golovkin bout in September weighed in on the Floyd vs. Conor fight. He has made a series of great points and we all need to listen. UFC and Boxing should not crossover at all.

De La Hoya feels that the “joke of a fight” will have long-lasting effects on boxing since it has no credibility:

Oscar De La Hoya took to Facebook on Thursday, with this statement:

“To my fellow #boxing fans:

I write in the hopes that together we can protect the sport of boxing.
With each passing day, it looks more and more likely that the circus known as Floyd Mayweather Vs. Conor McGregor will be coming to town in the near future.

As undercard fights start to take form, athletic commissions give their blessings in exchange for millions of dollars and the fighters start counting even more cash, one group will eventually be left to make sure this farce doesn’t occur.
We, the fans, who are the lifeblood of our sport.

Boxing is starting to dig out of the hole that Floyd and Manny Pacquiao shoveled by waiting seven years to put on a fight that ended up being as dull as it was anti-climactic.

2017 has started off as a banner year for boxing. Joshua vs. Klitschko; Thurman vs. Garcia; Golovkin vs. Jacobs; Canelo vs. Chavez. All four of these fights – and many more — have brought the fight game back and reinvigorated interest from the ever-elusive casual fan.

But if you thought Mayweather/Pacquiao was a black eye for our sport – a matchup between two of the best pound-for-pound fighters that simply didn’t deliver — just wait until the best boxer of a generation dismantles someone who has never boxed competitively at any level – amateur or professional.

I fully understand the initial attraction from any fan of combat sports. McGregor is almost certainly the best pound-for-pound MMA fighter. Floyd is Floyd — the most dominant boxer of his time.

But success in one sport does not guarantee success in another. Far from it. And let’s be clear, these are two different sports — from the size of the gloves fighters wear, to the size and shape of the ring, to the fact the one sport allows combatants to use their legs to strike.

Think about it, beyond Bo Jackson and Deion Sanders, what other athlete has successfully competed in two sports in the modern age? And Jackson and Sanders both played both baseball and football throughout their high school and college careers before going professional.

Furthermore, it’s not like McGregor would be fighting a good fighter, let alone a mediocre one. He would be fighting the best. To use a bit of an extreme analogy, I happen to be a pretty good golfer. Could I potentially hold my own on one of the second-tier tours? Maybe. But would I be able to compete with Rory McIlroy, Jordan Speith or Sergio Garcia? Of course not. Nor would I think to try.

Now, I know critics will say that I’m only writing this letter because my company is promoting what will be the culmination of an outstanding boxing year when Canelo Alvarez takes on Gennady “GGG” Golovkin in September, and I don’t want anything to distract attention away from that fight.

But my interest is in the health of boxing as a whole. It always has been. And if Floyd were to come out of retirement to take on someone like Keith “One–time” Thurman, Errol Spence or some other top welterweight, not only would I applaud the fight, I’d be the first one on line for a ticket.

That kind of fight is what the fans – and I am a fan first — deserve.

Which brings me back to the circus.

Floyd’s and Conor’s motivation is clear. It’s money. In fact, they don’t even pretend it’s not. But it’s also a lack of consequences for when the fight ends up being the disaster that is predicted. After this fight, neither of them will need us anymore. Floyd will go back to retirement — presumably for good this time with another nine-figure paycheck — and Conor will go back to the UFC.

It’s a win-win for them. It’s a lose-lose for us. We’ll be $100 lighter and we will have squandered another opportunity to bring boxing back to its rightful place as the sport of kings.

At this point, only we can shut the circus down by making it clear that we won’t pay to see a joke of a fight and telling our casual-fan friends that they shouldn’t either.

LatinoAthlete Staff - June 10, 2015
0
Pro Football Focus thinks the Minnesota Vikings are primed for a postseason run, while the Arizona Cardinals could be a disappointing team...