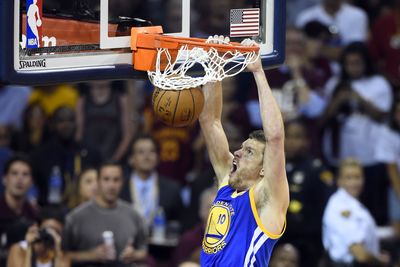 Lee’s time in Golden State looks to be coming to an end after five years.

Veteran big man David Lee will likely part ways with the Golden State Warriors this summer instead of returning for another season in a limited role, according to ESPN’s Marc Stein. Lee spent the 2014-15 season as a backup for the title-winning Warriors after years as a top contributor, but is expected to be traded before next season.

Lee still has one year remaining on the six-year, $80 million contract he signed with the team in 2010. The Warriors have privately acknowledged to his camp that “it would be unfair to the former All-Star to ask him to continue to serve in a limited role next season,” however, and have “resolved to work together to ‘come up with a good solution.'”

That means a trade because there’s simply no room for an expensive, traditional power forward on Golden State’s roster right now. Lee was buried on the team’s depth chart after years as a star because new coach Steve Kerr wanted to commit to the team’s smaller lineups and shooting-oriented style. After averaging 18 points, 10 rebounds and three assists per game during his first four years in Golden State, Lee saw his playing time cut in half and his numbers drop to eight points, five rebounds and two assists per game.

Lee was always professional about the situation, though, and that’s something everyone in the organization appreciated. After Game 1 of the NBA Finals against the Cleveland Cavaliers, Lee said the whole experience has given him new perspective as a player.

“It’s been a really interesting year,” Lee said. “I’ve actually gotten to see kind of the other side of the NBA. I’ve always been the guy that’s out there for 35 to 40 minutes. I’ve never really, I don’t think, had the true respect for guys … to see guys that don’t get a chance to play very often and come out and produce on a consistent basis — I never knew how difficult that was.

“So it’s really been a great learning experience for me this year. And while it’s been frustrating as a competitor to not be in there as much as I want to be in there, it’s been kind of cool to let go of my ego this year and say, ‘Hey, this is about the team.'”

It seems like neither Lee or the Warriors wants to go through the whole thing again next season, however, which means Golden State will aggressively try to move the big man in the next few weeks. With the draft set for June 25 and free agency for July 1, when Draymond Green becomes a restricted free agent, the team will likely try to move quickly so it can focus on the rest of the offseason.

The challenging part may be finding someone willing to take on Lee’s $15.4 million salary for next season. Lee stepped up in the Finals when the Warriors needed him and has a track record of production, but he’s also 32 years old and averaged just 18 minutes over 49 games last season. Most likely, Golden State will have to toss in an asset like its first-round pick in order to entice some team.

Lee’s tenure with the Warriors may not have gone perfectly according to plan, but that didn’t stop them from winning a championship. Now they’ll amicably move on, with Lee finding a bigger role elsewhere and Golden State using that extra cash on more important pieces.

LatinoAthlete Staff - August 2, 2015
0
The executive is leaving the organization after 13 years with the club. Boston Red Sox president and CEO Larry Lucchino will leave his...