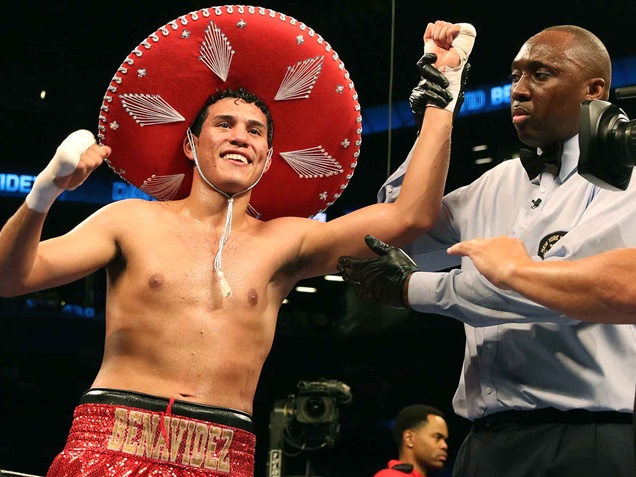 If there was anyplace that Rogelio Medina could be he would have taken the offer because he ended up in the ring getting pulverized! David “Red Flag” Benavidez annihilated Medina over the weekend!

Benavidez Aced it during his Saturday night in his 168-pound title eliminator against veteran slugger Rogelio “Porky” Medina, LatinoAthlete.com learned.

If you though Canelo Alvarez turned Julion Ceaser Chavez Jr into a punching bag, think again because Rogelio Medina is going down in 2017 as the most brutalized boxer.

Rogelio Medina can the the expert fighting skills of David “Red Flag” Benavidez who ended the fight with a brutal knockout blow you could hear the fist and snap then slam to the floor.

Medina was treated to a brutal seven-punch combo from “Red Flag” that knocked him out. Now, David Benavidez is 18-0 with 17 knockouts.

Red Flag made a promise and kept it:

“I said I was gonna knock medina out and I did ! anybody who wants to get it with me cam get knocked out too #DB Dropping Bodies #300 #elbanderaroja🔺”

David Benavidez, who was coming off a second-round knockout of Sherali Mamajonov said:

“This [victory] makes me more humble and gives me more motivation to work harder. There has never been a [168-pound] champion at 20 years old, but I’m going to be the first to do that. … This is just a glimpse of what I can do.”

“I did my best tonight. The plan was to win, work him from beginning to end, but he moved a little bit more than I anticipated. [Benavidez] did his job and hit me with a few good shots.”

Watch the highlights of the Brutal knockout:

i said i was gonna knock medina out and i did ! anybody who wants to get it with me cam get knocked out too #DB Dropping Bodies #300 #elbanderaroja🔺

Better luck next time to the Mexican professional boxer. That’s a punch Porky will be feeling all the way into 2018.

LatinoAthlete Staff - July 21, 2015
0
This is so awesome. There is so much to love about this video. A Phillies fan gets hit with a freaking foul ball...