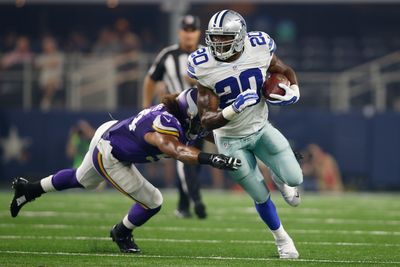 Despite being listed at third on the depth chart, Darren McFadden is the probable starting running back for the Cowboys.

The heir apparent to DeMarco Murray’s role as the starting running back of the Dallas Cowboys looks like it will be former Oakland Raiders first-round pick Darren McFadden, according to Clarence Hill of the Fort Worth Star-Telegram.

McFadden is expected to be the No. 1 back Sunday night when the Cowboys take the field against their NFC East rivals, the New York Giants. Of course, it’s unlikely that any of the team’s running backs will approach the NFL-leading 392 rushing attempts that Murray took in 2014, and the team will rely much more on a running-back-by-committee approach, no matter who gets the starting nod.

On Wednesday, Cowboys head coach Jason Garrett spoke about the merits of using multiple running backs and said that it’s advantageous having a versatile array of backs who can stay fresh.

McFadden earning the starting nod is a little surprising considering he is listed third on the team’s depth chart and third-year back Joseph Randle was expected to take over. Lance Dunbar is listed as the second running back, with newly acquired Christine Michael behind McFadden.

The Cowboys signed McFadden to a two-year, $3 million deal in March, but he took just seven carries in preseason and added two receptions.

After reportedly pursuing a trade for Montee Ball to add depth at running back, the Cowboys landed Michael in a trade with the Seattle Seahawks, sending a late-round pick in exchange.

In seven seasons with the Raiders, McFadden tallied 4,247 rushing yards and 25 touchdowns, in addition to 1,769 receiving yards and five touchdown grabs. He earned a reputation for injuries in Oakland and finished the first 16-game season of his career in 2014.

SB Nation presents: The Bears need to pray and more on the new NFL season

LatinoAthlete Staff - August 27, 2015
0
The superstar loves the karaoke stage as much as she does being the GOAT in tennis It's a busy time for...