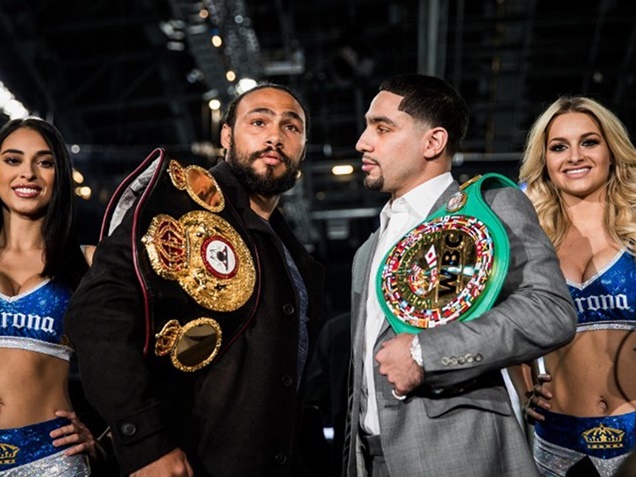 The predictions are in for the Premier Boxing Champions fight this Saturday, March 4 from Barclays Center between Danny Garcia vs. Keith Thurman.

Find out what fighters and trainers are predicting who will win the battle between Danny Garcia vs. Keith Thurman…

Danny Garcia was heard saying that he ranks Keith Thurman and the 4th or 5th best fighters he’s set to fight in the ring.

The big question is; “Who will win at the highly anticipated welterweight world title unification showdown?”

We will find out Saturday night, but we have 24 hours until the big event, so, let’s see what top boxing personalities, fighters, trainers and journalists are saying. LatinoAhtlete.com go word via Boxing Scene. Everyone is weighing-in with their predictions for the main event of SHOWTIME CHAMPIONSHIP BOXING on CBS. Like we said before the event will be taking place at Barclays Center, the home of BROOKLYN BOXING™.

Tickets for the live event, which is promoted by DiBella Entertainment, start at $50 (not including applicable fees) and are on sale now. You can purchase tickets online by visiting www.ticketmaster.com, www.barclayscenter.com or by calling 1-800-745-3000. Tickets are also available at the American Express Box Office at Barclays Center. Group discounts are available by calling 844-BKLYN-GP. 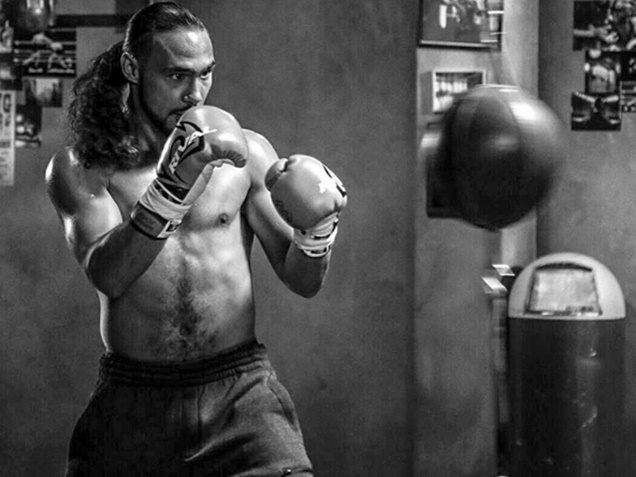 What are boxing experts, journalists and fighters saying?

“I’ve watched both Danny Garcia and Keith Thurman all the way through the amateurs and now in the pros. They’re both really good fighters. Both strong. Both intelligent. Both make good adjustments over the course of a fight. I’m choosing Thurman to stay undefeated because, I think not only is he a little stronger, and a little smarter, but I also think his boxing ability is superior to Garcia’s.  I think he’s going to give Danny problems when he moves. I think Thurman is going to have Danny off-balance. I think Thurman is going to make it very hard for Garcia to set up his offense. And I think based off of that one element Thurman will win a majority decision”

“I think Danny Garcia takes it. He finds a way to win. He has experience and has been able to make adjustments to get the win. Garcia by decision over Keith Thurman.”

“I haven’t seen Danny Garcia hurt before, but I’ve seen Keith Thurman hurt to the body against Luis Collazo. Garcia took punches from hard-hitting Lucas Matthysse. No matter how much Garcia’s been the underdog, he always finds a way to pull the upset.”

“It’s going to be a great fight. I’m learning toward Keith Thurman over Danny Garcia.”

“I’m picking Keith Thurman to win by decision over Danny Garcia. Both fight with a lot of heart, and it’s going to be a Fight if they Year type of fight. I just think Thurman has more weapons in his arsenal. Both are undefeated, so may the best man win.”

“I love this fight and I really feel that it’s a toss of a coin. Danny Garcia has faced better opposition, but I feel that Keith Thurman is about to make a statement.”

Who will be the victor according to the pros?

“First of all, this looks to be a terrific fight, so props to both fighters for risking their undefeated records and not hiding behind belts. This could easily go either way; I see it going to a decision with Danny Garcia winning. I think he’s fought the better opponents and will be able to land the bigger punches against a boxer in Keith Thurman who will at times give him fits.”

“Keith Thurman is fresh, confident as hell after beating Shawn Porter, as relaxed as I’ve seen him, in the best shape of his life and, thanks to Angel Garcia’s mouth, perhaps just a little bit extra motivated to shut that mouth. Danny Garcia is an underrated boxer and puncher and will give Thurman all he can handle. But eventually “Swift” will succumb to Thurman’s power. Both men have a strong desire to be the face of the welterweight division, if not all of boxing. I believe “One Time” will prevail.”

“Danny Garcia is the more experienced, seasoned fighter, and it should be apparent on March 4. The underrated Philadelphian never got enough credit for upset wins over Amir Khan and Lucas Matthysse, and it seems he’s being overlooked again. Keith Thurman will bring it, and both men could be hurt in a fight with many big exchanges. But I say Garcia ekes out a deserving nod.”

Gordon Marino, Wall Street Journal, Has no doubt that its Garcia:

“I am picking Danny Garcia by a decision. I think Garcia has superb skills. Keith Thurman is explosive but wild and I think Danny will be able to capitalize on the many openings that Thurman will give him. Danny has a good jab and he closes the distance well. I think Garcia is a multi-dimensional fighter whereas with Thurman, all his eggs are in the knockout basket. On the mental side, both of these guys have great confidence in themselves and a mighty will to win. They both have solid chins. This is a terrific matchup.”

“Keith Thurman has been fighting at a higher level more consistently than Danny Garcia as of late, and the Shawn Porter fight showed him to be able to make adjustments on the fly when necessary. All should serve him well on Saturday.”

Bobby Cassidy, Newsday thoughts are this:

“Any time you have two undefeated fighters – in the prime of their careers – it’s extremely difficult to pick a winner. I think the difference in this fight will come down to experience. Danny Garcia has been fighting better competition for longer. He’s been here before and when the going gets tough, he’ll be able to weather the storm and box through it. While Keith Thurman holds the decisive edge in power, I think Danny is more versatile. He’s quicker and is the better boxer. Danny has more tools to win the fight than Thurman and he’s going to need all those tools. I think Garcia wins a close unanimous decision.” 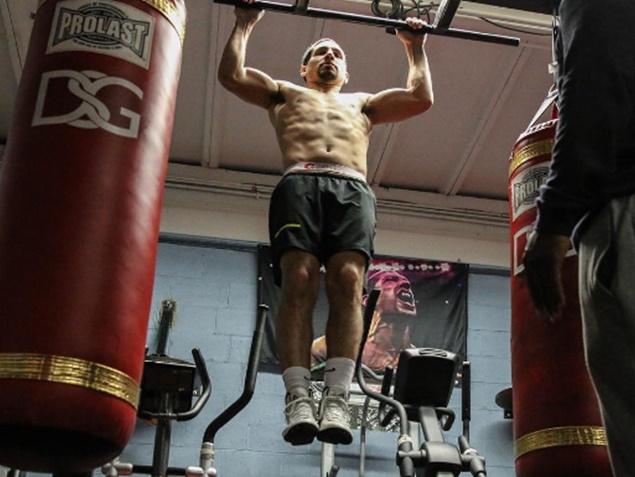 Who will win the fight between Danny Garcia vs Keith Thurman?

“Danny Garcia seems to come up biggest in big moments, underachieving when the lights are dimmer. Keith Thurman has a power advantage, but Garcia maybe the better boxer. With Garcia’s left hand counter being a tonic to a Thurman who sometimes lunges, in what could be a messy fight at times, I’ll go with Garcia by the skin of his teeth.”

“Amir Khan and Lucas Matthysse are two good reminders of just how foolish it is to pick against Danny Garcia, who is always at his resilient best when odds and pundits line up against him. But Keith Thurman knows that, and he’s smart enough to know that history repeats itself if its lessons are ignored. He won’t.  Thurman also knows how to use a very good jab, which could be a foil against Garcia’s dangerous counter and — if consistent — enough to score points in a narrow, perhaps controversial victory.”

“My pick is that Keith Thurman will beat Danny Garcia by decision with his overall versatility and athleticism.”

Ronnie Shields, trainer of Jermall Charlo and others, states:

“Keith Thurman-Danny Garcia is a 50-50 fight. Both guys are well-schooled, and I predict that it will end in a split-draw.”

“Keith Thurman has the faster feet and more skiddish style. Although he is looked at as the puncher, Danny Garcia has to not chase Thurman. Garcia has to make Thurman come to him so he can counter punch. Garcia’s dilemma is does he chase Thurman or does he wait. He always makes the right decision. I say that he waits and wins a controversial decision.”

“It should be an interesting fight. Danny Garcia has the speed, and he should be able to use that to his advantage. On the other hand, Keith Thurman should have more power and if he lands, Garcia may be in trouble. I am focused on our fight with Kell Brook, but I hope that we are able to fight the winner, which I think will be Garcia by close split-decision victory.”

“I pick Keith Thurman due to adjustments to box when he’s in trouble and his ability to hurt you with a punch. Tough bout to pick but I’m picking Thurman to beat Danny Garcia by decision.”

“In my opinion, Danny Garcia wins a tough, hard-fought decision. I never really thought that Keith Thurman would be able to pull it out in a hard, 12-round fight.”

“I think Keith Thurman is going to win the fight, but he needs a knockout. If it goes to the distance, I think they’ll give it to Danny Garcia.”

Kevin Cunningham, trainer of Devon Alexander, says its all Garcia:

“I’ve got Danny Garcia winning by a decision over Keith Thurman.”

Here is our thoughts on the upcoming fight between Danny Garcia vs Keith Thurman:

“The fight can go either way. Garcia is extremely confident, he’s quick, yet a bit cocky. Whereas, Thurman is smart, and a quiet storm ready to keep his undefeated title. Both fighters will go at least 11 rounds, but if Garcia lets Thurman gain momentum it will be over, lights out. Its all going to be based on Garcia’s strategy. If he knows his oppenant that there is a fighting chance, but if he lets his guard down, Thurman will goin in for the KO. We would like to see Garcia win, but we have a feeling Thurman will be taking the victor. KO in the 11th round.”