During Thursday’s Astros vs the Detroit Tigers game the 4th inning was stellar, but it was all due to Carlos Correa, Marwin Gonzalez, Juan Centeno Homers which traveled 1,099 feet.

LatinoAthlete.com heard about the impressive Houston Astros 4th inning when Carlos Correa, Marwin Gonzalez, Juan Centeno all got homers helping the Astros take it to a 7-6 victory over the Tigers.

The Astros vs The Tigers game stated with a game-changing, seven-pitch walk from Astros second baseman Jose Altuve. But the game was all about the 4th inning when Astros shortstop Carlos Correa was next to bat after Altuve. Mind you Correa had just returned to the game after a two-day rest battling a sinus-induced illness. He had fans roaring when he hit a 379-foot, two-run home run off a sign above Minute Maid Park’s Crawford Boxes.

The fourth inning didn’t stop there, next was the Venezuelan first baseman Marwin Gonzalez, 28, who matched Correa, striking another two-run homer to right field. Right after that the 27-year-old Puerto Rican Juan Centeno followed suit. The cool part for Centeno is that he became the first Astros player to homer in his first two games with the team.

Marwin Gonzalez weighed in on the homer spectical saying:

“It was amazing the way we did it. [Verlander] was hitting his spots in the first three innings, making good pitches, but then Correa was patient in that at-bat and he started everything.” 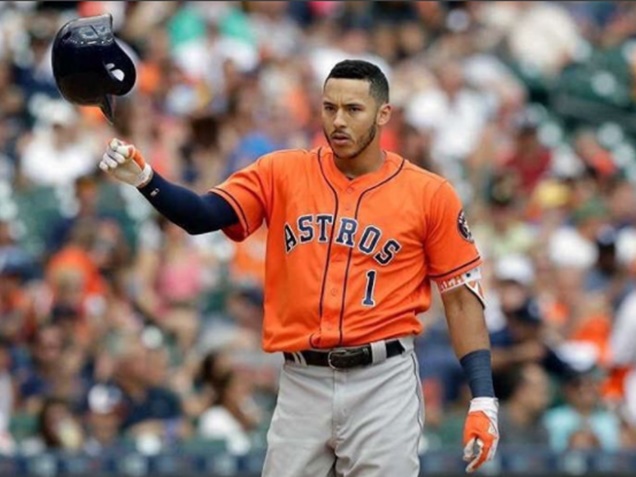 It was noted by Statcast™ that Correa, Gonzalez and Centeno’s homers traveled a combined 1,099 feet.

“They got the team going. After that, our pitchers did a great job keeping us in the game and we were able to win the game.”

The Astros manager A.J. Hinch said of the Astros’ success against Verlander in the 4th:

“We tried to ambush him early, which is dangerous. You look up and he has 20-plus pitches in three innings. He didn’t have to go deep into the counts to get his outs. You go one way or the other with him; If you wait him out, he gets stronger. Honestly, I think the inning started with a really hard-earned walk by Jose Altuve. That set the tone for really good at-bats in a row.”

Could this be a foreshadow of the Astros heading to the World Series this year? If Correa, Gonzalez and Centeno continue their triple threat tactics we believe so.

Manuel Frias - December 18, 2016
0
The dislocated finger is bad. Watching it get relocated is worse.Read more...