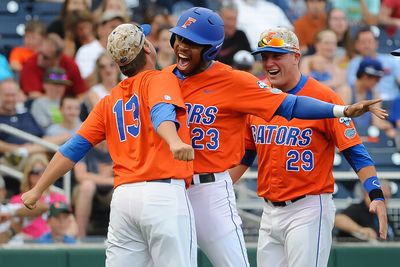 Four (four!) homers propelled the Gators past the Canes for the second time in less than a week, sending Miami home for good.

It’s safe to say the Gators own the Hurricanes right now. Four days after beating their in-state rival by 12 runs in their Omaha opener, Florida battered Miami, 10-2, on Wednesday night, single-handedly eliminating the Canes from the College World Series. In the two games, the Gators outscored them, 25-5, and outhit them, 28-15. Including the regular season, Florida beat Miami four times in 2015 and has now won 21 of the last 26 matchups.

As Miami packs its bags, Florida readies for a showdown with Virginia in the bracket finals on Friday.

While Miami’s first loss was death by singles (Florida racked up 15 runs with the assistance of just two extra-base hits), the Gators bludgeoned them out of their misery with the long ball this time around. There had been just three total homers in each of the last two College World Series, but Florida had four by the seventh inning. Harrison Bader and Buddy Reed both blasted 400-foot bombs in the first inning to hand the Gators an early 3-0 lead. Richie Martin left the yard in the sixth to push the lead to 8-0, then Peter Alonso smacked one out in the seventh to put two more runs on the board.

Florida wasn’t just sneaking them over the fence, either. Alonso, Bader and Reed hit the three longest homers in TD Ameritrade Park history (the fourth longest was also hit by a Gator: Preston Tucker in 2011). Not once in the 212 games played during TD Ameritrade’s five years of existence — College World Series or otherwise (Creighton University plays its home games there) — had anyone ever hit a home run to dead center. The Gators did it twice in one game.

First Bader in the first at-bat of the game…

… then Alonso in the seventh.

So here’s where we stand with the bracket: Florida plays Virginia on Friday, and has to beat them twice in order to advance to the finals. In the other bracket group, TCU faces LSU on Thursday for the right to play Vanderbilt on Friday.