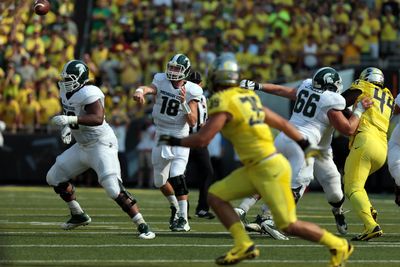 Week 1 was fun, wasn’t it? We got to see some bluebloods implode, a few upsets of ranked teams, the spin move to end all spin moves, a Hail Mary and a possibly NSFW marching band performance. College football is BACK!

Week 2 brings us … distressingly few marquee games, but there’s definitely enough on the slate to keep you occupied throughout the weekend. The NFL’s back, so it’s not the five-day extravaganza we saw on college football’s opening weekend, but the good news is all the action’s packed into three days now.

Here’s the full schedule for the weekend, complete with viewing options, links to our many excellent team blogs and the best choices for your college football experience.

This could be a sneaky good game for your Thursday night! Both teams had successful Week 1 outings: Louisiana Tech put up 62 points against FCS Southern while Western Kentucky beat Vanderbilt (and possibly had more fans in the Commodores’ stadium than the SEC hosts did). This is also a matchup between two of the best non-power passing offenses. The Hilltoppers are led by reigning Conference USA MVP Brandon Doughty, while Florida transfer Jeff Driskel had a career-best game in his debut with the Bulldogs.

This game sure looked more appealing a week ago, before Utah State struggled to a 12-9 win over FCS Southern Utah. This should still be a matchup between two of the best defenses in the Mountain time zone, and the last two games of this series have been decided by a single score.

You can start your night with this, but unless some Weird Friday Football happens, this’ll probably be out of hand fairly early on. Just in time for you to switch over to the other game!

Both teams impressed in their own ways in Week 1, considering the competition. Houston started the Tom Herman era with an easy 52-24 win against FCS Tennessee Tech. Louisville lost by a touchdown to No. 6 Auburn, and picked off Tigers quarterback Jeremy Johnson three times in the process.

Quarterback Greg Ward Jr. averaged 10.2 yards per attempt, ran for 101 yards and scored three total touchdowns. He seems like the perfect fit for the Herman offense, and Saturday will be a much bigger test for both of them.

The only other game between power schools in this time slot is Wake Forest at Syracuse. Michigan’s a pretty heavy favorite here, but this will certainly be better than that.

Keep it in mind: Bowling Green at Maryland, BTN

Bowling Green might have the most fun (and explosive) offense in the country, and doesn’t appear to be able to defend the run. That might be the only thing Maryland can do on offense this season, so expect an explosive game, with an over/under set at 70 points.

In case of emergency: Buffalo at Penn State, ESPN2

An exciting new coach with a history of success and unprecedented achievement at his former school, and also James Franklin!

Texas’s defense didn’t do much to stop Notre Dame’s attack … maybe Virginia’s well? The Cavaliers have one of the best young defensive backs in the country in Quin Blanding, and the quite good UVA secondary will be faced with one of Week 1’s brightest stars in Notre Dame QB Malik Zaire.

Yes, Washington State lost to a bad FCS team, but Rutgers lost four defensive backs from the two-deep in one arrest. Against a Mike Leach offense, that’s potentially terrifying.

Keep it in mind: Iowa at Iowa State, FOX

Hey, Minnesota looked pretty good against TCU! Colorado State hung 65 on an FCS team! This could be interesting, sure!

Best option: No. 7 Oregon at No. 5 Michigan State, ABC

The sparse early slate is almost made up for by a late top-10 matchup, a rematch of last year’s fun game in Eugene. The Ducks won that one with a late comeback, but this is an appealing style matchup that should produce another entertaining affair.

These teams combined for 100 points against MAC competition in Week 1 and hold high hopes as dark horse contenders in tough conference. Going to be a rough weekend for one fan base!

This isn’t the only SEC game, but we chose to ignore Georgia at Vanderbilt and Kentucky at South Carolina at for various safety reasons. All seven teams in the SEC West appear to be division contenders at least to some extent, but the candidacies of these two teams are particularly dicey. LSU’s quarterback issues and Mississippi State’s run defense will be tested, and someone’s surely ending up near (or in) the top 10.

In case of emergency: No. 20 Boise State at BYU, ESPN2

Boise looked back like its old self against Washington, while BYU’s backup blue-chip quarterback threw a Hail Mary to beat Nebraska. This is probably one of the best non-power matchups all season, and it’s worth staying up for. Trust us!

Get one roundup of college football stories, rumors, game breakdowns, and Jim Harbaugh oddity in your inbox every morning.