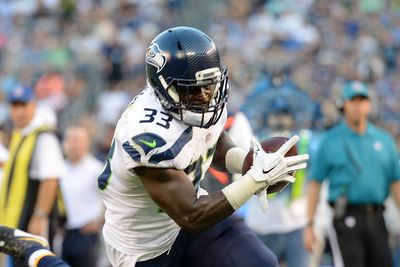 The Seattle Seahawks trade Christine Michael to the Dallas Cowboys. We take a look at the fantasy implications.

After signing Fred Jackson on Friday, the Seattle Seahawks began shopping third-year running back Christine Michael. On Sunday, the Dallas Cowboys acquired Michael. Michael has been a promising talent since he was drafted by the Seahawks in the second round of the 2013 NFL Draft. After several years of backing up Marshawn Lynch and Robert Turbin, Michael didn’t see many opportunities.

He has a shot at more opportunity in Dallas. The Cowboys have yet to fully commit to any of their running backs. Joseph Randle, Darren McFadden and Lance Dunbar are all expected to share the workload in a committee backfield. Michael simply adds to that depth. The Dallas Morning News suggests that Michael could be used in short-yardage situations.

Fantasy impact: If anything, Michael adds to an already crowded backfield. Randle and McFadden owners won’t be happy, especially if Michael gets goal-line work. He’s nothing more than a flier in fantasy drafts. Much like the Cowboys accomplished, fantasy owners will simply be padding the depth of their bench with MIchael on their roster. There’s always a chance Michael sets himself apart from the rest, and he’s extremely low-risk at this point.