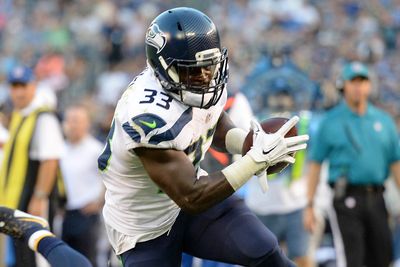 The Cowboys aren’t ready to hand Christine Michael a prominent role yet. We break down the fantasy implications.

The Dallas Cowboys‘ muddled backfield got yet another question mark when the team acquired running back Christine Michael from the Seattle Seahawks. While the move created speculation that Michael could steal the starting job, the Cowboys are preaching caution.

Vice president Stephen Jones said on Monday that Michael is a “long shot” to be active for Sunday’s season opener against the New York Giants, adding that “we’re very content with the three backs that we have as we head into the Giants game.” The Cowboys are going into the season with Joseph Randle, Darren McFadden and Lance Dunbar ahead of Michael on the depth chart.

Fantasy impact: Michael has lots of natural talent, but consistently struggled with the finer points of the game such as pass protection and ball security, which is largely why Seattle shipped him out. He has little-to-no chance to make an early-season impact with so many people ahead of him on the pecking order. Michael could be thrust into a bigger role down the stretch if Randle and/or McFadden flounder, but he’s a lottery ticket at best. For now, fantasy owners can avoid him in standard 12-team leagues.

A home run off the catwalk led to our favorite MLB...

LatinoAthlete Staff - August 29, 2015
0
Tropicana Field and its catwalks can lead to some odd and confusing moments. Sometimes they result in mass confusion among the umpires....