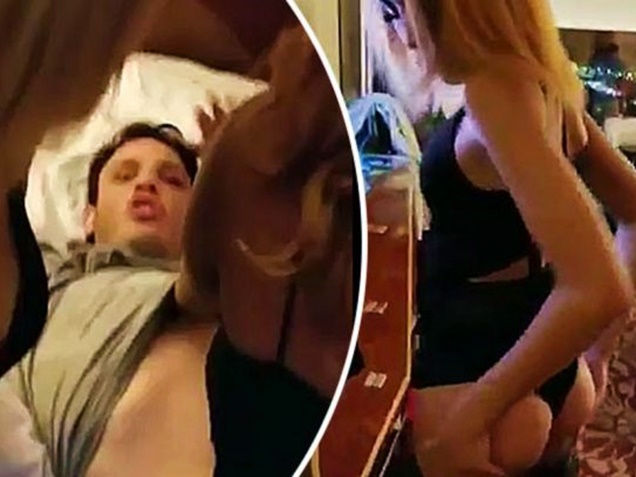 After Canelo beat Julio Cesar Chavez Jr, the Mexican fighter was spotted drunk with a bunch of THOTs. It wasn’t a smart move on Chavez Jr’s part.

LatinoAthlete.com has learned via sources that Julio Cesar Chavez Jr must have been stuck on stupid when he was caught on a bed with a bunch of money hungry THOTs.

We learned via reports, that Julio Cesar Chavez Jr, who is married, put himself in a situation and apparently things got ugly, because he is now missing his $3 million dollar winnings from the Canelo fight. After Saul Canelo Alvarez won the fight by unanimous decisions, Julio must have really been down to do something this dumb.

Instead of being the pride of Mexico he is looking like the fool of Mexico.

Here is what we are hearing about Julio Cesar Chavez Jr:

Married boxer Julio Cesar Chavez Jr is now looking like boo boo the clown after his wife has come forward revealing that her husband was robbed of his $40,000 watch and his $3 million fight check by a group of strippers.

Julio can be seen laying in a bed with these THOTs as they are shown flauting their butts and trying to disrobe a drunk Julio Cesar Chavez Jr.

See, after the fight in Las Vegas against Canelo Alvarez, Julio went to blow off some steam with a group of stripper who were pawing at him.

His wife, Frida, told ESPN that the couple met a British man and some women at the hotel bar on May 8 before she went back upstairs to care for the couple’s daughter, Julia.

Frida Chavez is also claiming that the man and the women may have been drugged Chavez Jr and then took advantage of him. The whole thing was caught on tape and Chavez Jr looks completely lost on what was going on during the night of partying. His wife claims those same people robbed Chávez of his phone, a $40,000 Hublot watch, and his $3 million check from the Alvarez fight.

What stays in Vegas leaked and we have the footage for you.

Contributor - May 9, 2017
0
When it comes to UFC Star Yair Rodriguez there is not much that he cares about. He has no girlfriend, and no time for...