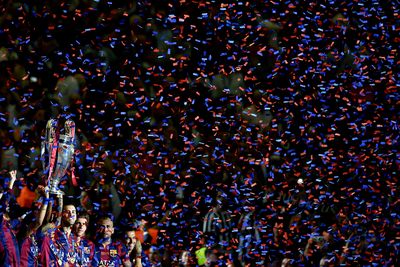 Confused about what happens when a match ends in a tie? Here’s how extra time works in the UEFA Champions League.

The UEFA Champions League playoff round concludes on Wednesday, and there’s a good chance that one or more of the ties won’t be settled at the end of 90 minutes. If that happens, extra time will be required.

In the group stage of Champions League, games can end in ties, with each team getting one pout. But all ties in the Champions League knockout phases — both in the qualifying rounds before the group stage and the final phases afterwards — have to be settled, and are settled in the same manner. There are two 90-minute games, home and away, settled by aggregate score with away goals as a tiebreaker. If both the score and extra goals are tied, extra time is necessary.

Teams play two 15-minute periods of extra time with no golden goal. That means that, no matter who scores or how many times they score, all 30 minutes of extra time must be completed. The away goals rule does apply during extra time in the Champions League, so the team who plays the second leg of a tie on the road has an inherent advantage.

Contributor - July 7, 2017
0
Right now the big talk is the Canelo vs GGG and Mayweather vs McGregor, but once both of these fights are done, Saul Canelo...