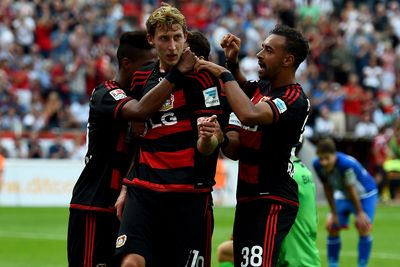 There’s a wide spectrum of teams competing for places in the Champions League group stage. Who’s going to make it through the storm?

The Champions League playoff round represents the last step before the group stage, the promised land for clubs around Europe searching for glory. This is the final stage of qualifying for the continent’s top club competition, and there’s just 20 teams left, paired up and ready to battle it out for the last ten group stage spots on offer.

Will Manchester United waltz through Club Brugge with ease, or will the upset kings of last season’s Europa League strike again on a larger stage? What about the duel of two quietly high-quality teams in Bayer Leverkusen or Lazio? Malmö want to make it back to the group stage to improve on what they did a year ago, but have to get past a determined Celtic side to get there. Monaco are itching to show that last season’s quarterfinal run was no fluke, but Valencia are equally eager to show that they’re back and that they belong on Europe’s biggest stage.

Those are just a few of a host of tasty matchups the next two weeks will be bringing us. There’s going to be fantastic goals, wonderful moments, painful mistakes, massive upsets, and huge surprises. In the Champions League, anything can happen. In this last qualifying round, just about anything will happen. Now it’s time to see who makes the cut, and who drops to the Europa League. There’s a lot on the line, and how teams handle the pressure will be very telling for their seasons to come.

Dates and results shown for first and second legs respectively; first team listed is home in the first leg. All times Eastern. Links to Livesoccer.tv listing for viewing options.