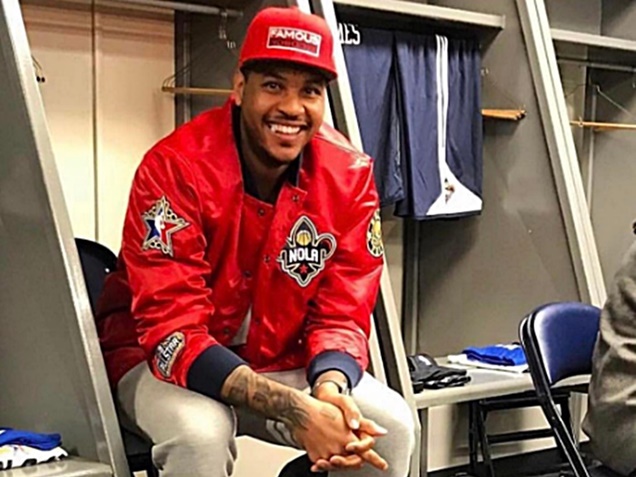 Carmelo Anthony days are numbered with The Knicks. So, could it be 2014 all over again for the Bulls and Carmelo? Phil Jackson indicated that the organization is still seeking trade options for Carmelo Anthony!

Read more on the fate of Carmelo Anthony and the New York Knicks exploring trade options for the NBA player….

LatinoAthlete.com has learned that Phil Jackson is ready to get rid of the teams All-Star forward, stating, Carmelo Anthony “would be better off somewhere else.”

The Knicks team president, said Friday, after the team completed its fourth straight losing season that the team fell short on preseason expectations since the additions of Derrick Rose and Joakim Noah.

It appears that Carmelo is looking expendable, this according to Jackson who said:

“We’ve not been able to win with [Anthony] on the court at this time. I think the direction with our team is that he’s a player that would be better off somewhere else and using his talent somewhere where he can win or chase that championship.”

For four straight seasons the New York has missed the playoffs. Plus, the team has lost at least 50 games in the past three seasons, all with Jackson as president.

Anthony, 32, has been on the verge of trade rumors all season. Meanwhile, the 10-time All-Star to tell Jackson personally wanted to remain with the Knicks and would not waive his no-trade clause.

Anthony, who is entering the fourth season of a five-year, $124 million contract said Wednesday, he would “love” to return to the Knicks. He also stressed that he wanted the team to make a commitment to winning immediately.

Despite, Melo wanting to stay, Jackson made it clear he thought Anthony should consider accepting a trade to another team.

“I just said that you haven’t won here. You don’t want to end up your career not winning. This is not something that you want to have labeled on your career. You want to get to that territory where you have a chance to win. That’s — we talked around that. But he likes it here. He expressed that.”

Currently Melo is still with the Knicks since Jackson has been unsuccessful in finding a trade that was “rational” for the club to pursue. Ultimately, that decision is up to Melo, though.

The Clippers are stalling to keep DeAndre Jordan from meeting with...

LatinoAthlete Staff - July 8, 2015
0
Doc Rivers and company are doing everything in their power to keep the free agent center away from Dallas. The battle for DeAndre...