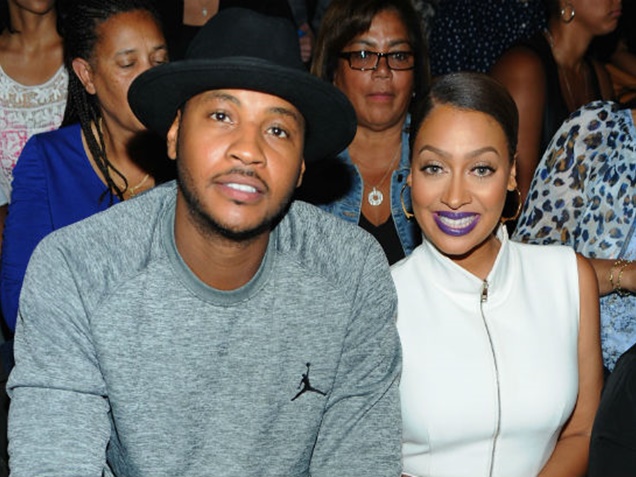 It appears that Carmelo Anthony was never actually married to LaLa in his own mind since he was caught telling friends “La La is married, I’m not!”

The soon to be ex New York Knicks player has been the center of cheating rumors for years and now it’s all coming to the surface. Read more on Carmelo Anthony…

LatinoAthlete.com is shocked to hear about Carmelo Anthony and his Power star, LaLa Anthony calling it quits. Just days after Phil Jackson hinted Melo’s days were number with the Knicks.  Maybe the rumors are true, Melo has always felt like “La La is married, I’m not!”

We have learned via Multiple sources who told Page Six that Melo would often flirt or hook up with women while he was on the road with the Knicks. This type of behavior went on during his nearly seven-year marriage to LaLa.

Here is what one sources are saying about Carmelo Anthony and LaLa separating:

“Melo’s tagline was, ‘She’s married, I’m not.’ That’s how he would justify it. His attitude is that all professional athletes do it, and many of them do. La La has put up with a lot. She knew it was going on, but I guess this time she’s had enough.”

Yesterday we told you that there was a rumor floating around that Melo may have planted his seed in a stripper. Well, we can officially say that that report is bogus. Source close to Melo added:

“The stripper pregnancy rumor is not true. Yes he’s not been perfect, but the baby with a stripper isn’t true.”

Friends of the couple confirmed that Melo and LaLa’s marriage was over for awhile and it was only a matter of time before it went public.

“They’ve been living separately for several months. They’ve broken up in the past, they split three years ago, gave it some time and then got back together. They’re hoping the same works again.”

Word is, there’s next to zero chance of reconciliation, and the drama hasn’t ended for Melo and LaLa.

On Tuesday morning, LaLa Anthony was spotted in New York City with her left ring finger noticeably bare. Of course, Melo did what any petty person does, he ditched his wedding ring too.

There are many rumors swirling, so we will try to keep it factual.

Contributor - March 7, 2017
0
The results are in for the Thompson vs Woodley fight, and Tyron Woodley retains UFC Welterweight Title over Stephen Thompson Takes ! Did you...