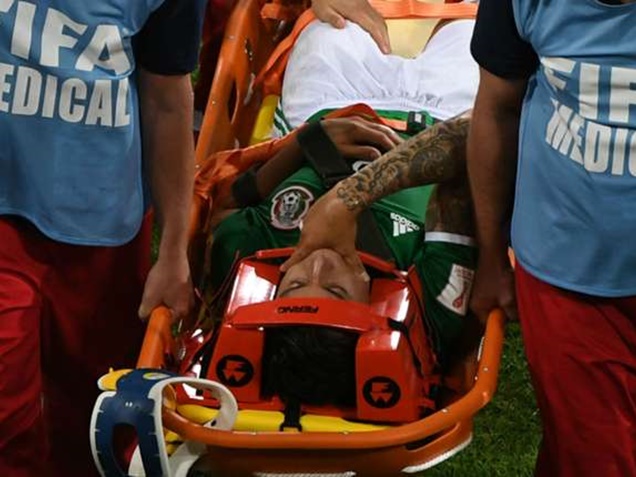 LatinoAthlete.com has just received word that Mexico defender Carlos Salcedo shoulder was successfully operated on after injuring himself against New Zealand.

On Wednesday, Carlos Salcedo suffered a shoulder injury that took him out of the remainder of the Confederations Cup. Read on…

Now, Carlos Salcedo is in the hospital recovering from a successful AC joint shoulder surgery.

At the time of the injury, Salcedo was forced to leave the field on a stretcher after landing on his shoulder. The incident took place during the first half of the Group A clash.

The loss of the 23-year-old defender for Mexico national football team. The loss of Salcedo was disappointing for El Tri as they stumbled to a 2-1 win over New Zealand.

With the 6′ 2″ 170 lbs Guadalajara, MX native out, El Tri has been unable to call in a replacement for Carlos Salcedo, who has joined Eintracht Frankfurt on loan from Guadalajara.

Salcedo’s injury didn’t happen without a bit of drama since New Zealand and officials did not stopping play. It triggered Mexico manager Juan Carlos Osorio react in anger.

Luckily, the Mexicans made it four points from two matches during their second-half comeback. It was Raul Jimenez and Oribe Peralta who shut down Chris Wood’s 42nd-minute opener in a heated match as tempers flared.

LatinoAthlete Staff - August 26, 2015
0
The Cowboys' top corner will undergo an MRI on his knee to assess the full extent of the injury. The Dallas Cowboys...