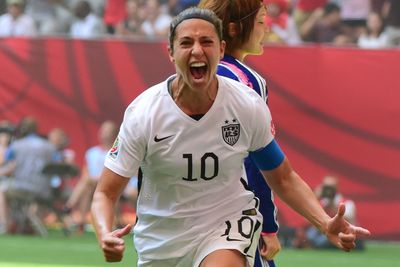 The USWNT midfielder has been declared the best player of the World Cup after her hat trick in the final.

After a World Cup final performance for the ages, United States star Carli Lloyd has been awarded the Golden Ball, officially declaring her as the best player of the 2015 Women’s World Cup.

Lloyd scored the fasted hat trick in Women’s World Cup history, netting three goals in the first sixteen minutes of the match as the USWNT raced out to a stunning 4-0 lead over Japan. The last of those three goals she scored may have been the goal of the tournament, lobbing the ball in from almost the halfway line to beat Japan’s goalkeeper.

Lloyd finished tied with German Celia Sasic as the top goalscorer of the World Cup with six in seven matches, and every goal was huge. She scored the winners against China and Germany to get the US women this far, and her first goal, against Colombia in the first knockout round, secured that match and took the wind out of Colombia’s sails as they tried for the upset.

While she drew some criticism for her play in midfield, it’s impossible to discount that when it came to the clutch moments, Lloyd came up big when it counted the most. That’s the hallmark of a Golden Ball winner, and she well deserves the honor. Congratulations, Carli Lloyd, you’ve earned this.