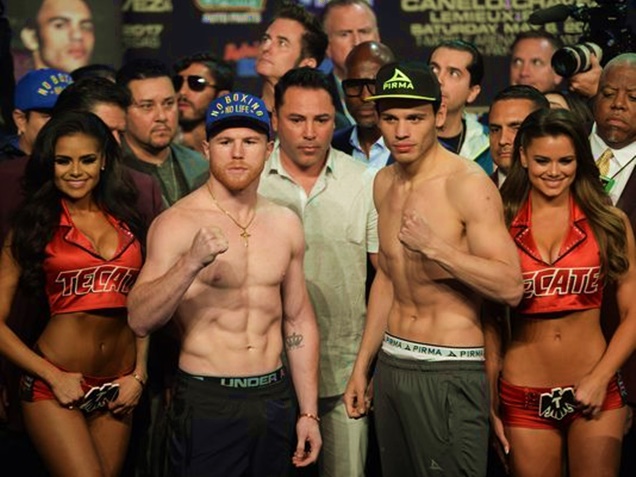 Two of Mexico’s biggest icons are going head to head tonight in what is said to be the biggest fight of the year! This Cinco De Mayo weekend will be EPIC since Canelo Alvarez and Julio Cesar Chavez Jr will battle it out in the ring!

LatinoAthlete.com is indifferent on who will win the Canelo vs Chavez Jr Predictions. Although, we have a strange feeling that Ring Magazine and Lineal middleweight champion Saul “Canelo” Alvarez (48-1-1, 34 knockouts) will win. His opponent is the other Mexican favorite, former middleweight champion Julio Cesar Chavez Jr. (50-2-1, 1 no contest, 32 KO’s), who has plenty on the line.

There is a lot ridding on the Golden Boy Promotions event, lead by boxing champ Oscar De La Hoya, who was recently seen partying in Cabo earlier this week. The Canelo vs Chavez Jr Predictions are in and everyone is leaning towards Saul Canelo Alvarez.

Despite the drunken reports, today is all about the predictions of the Canelo vs Chavez Jr fight. Who will win the 12 round fight held at the T-Mobile Arena in Las Vegas. The fight will be televised on HBO PPV, 9 p.m. ET.

The Canelo vs Chavez Jr Predictions are 5-2 that Canelo will be the victor of this battle – Mexico vs Mexico fight.

Here are the Canelo vs Chavez Jr Predictions:

“I expect this to be a really exciting fight. But as far as how it goes, Canelo is the superior boxer, and he has better speed and a bigger heart. Even though he will face a bigger, stronger man and will be fighting at by far his heaviest weight, I think he’ll turn back a stiff challenge from Chavez and win a decision.” – Dan Rafael/ESPN – Alvarez by decision

“Alvarez is in good form while Chavez Jr.’s career has stalled in recent years. I think Canelo will be too sharp, forcing a late stoppage. It will be interesting to see Canelo against a bigger opponent, and he will eventually wear down Chavez Jr.” – Nick Parkinson/ESPN UK – Alvarez TKO8

“Size advantages are often overrated, and in this case, I expect Chavez to be drained from trying to make 164.5 while Canelo has all the edges in terms of skill, poise, confidence, speed, footwork, etc. It might not be as one-sided as Manny Pacquiao-Oscar De La Hoya — and Chavez, at 31, is young enough that he probably won’t hit the wall as dramatically as De La Hoya did that night — but I see a somewhat similar outcome. If Chavez uses his height and range and boxes more cautiously, there’s a very realistic chance that he lasts the distance. But more likely, his bravery and lack of in-ring discipline will open the door for Canelo to force a stoppage in the later rounds.” – Eric Raskin/HBO.com – Alvarez by KO10

“I think Canelo should win because of his speed, good combinations of blows and lethal counterpunching, but if Chavez is able to show some speed and waist movements, the fight could go either way.” – Juan Manuel Marquez/ESPN Deportes/Golpe a Golpe – Alvarez by decision

“An interesting match in which I think Alvarez will dominate to an easy decision. Chavez is a fighter of stamina who could easily surprise Canelo with quick combinations. But in the end, Alvarez’s experience and the pressure that he will impose through the fight will give him the victory.” – Carlos Narvaez/ESPNdeportes.com – Alvarez by UD

“There is much talk about the sacrifices both fighters have had to bear to make the catchweight of 164.5, and the worst part seems to be for Chavez, who has been undisciplined through his career and has missed weight a few times. But something has changed drastically for this fight. If he makes weight, as expected, the son of the legend will come with advantages of weight, size, reach and a better chin.” – Leopoldo Gonzalez/ESPN Deportes/Noche de Combates – Chavez by decision

“It is very complicated forecasting this fight. If Chavez recovers well from making the 164.5-pound limit, by size and power alone he should be able to win by KO before the seventh round. If he does not get the stoppage, it will be Canelo’s night.” – Bernardo Pilatti/ESPNdeportes.com – Chavez by KO

Do you agree with the Canelo vs Chavez Jr Predictions?