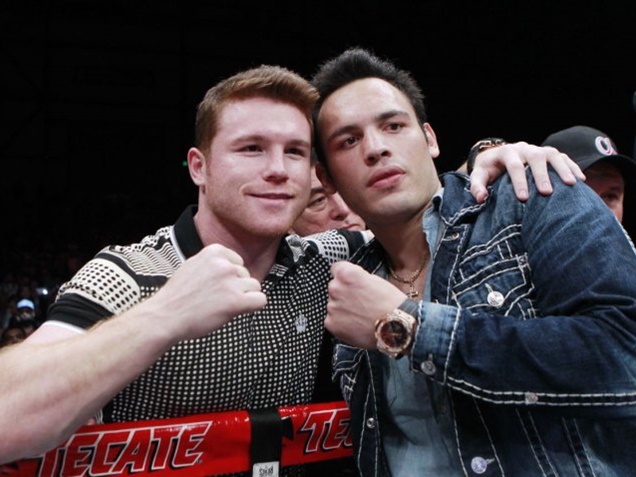 First, Oscar De La Hoya said Mexico was thirsting for Canelo vs Chavez Jr. fight back in December.  Then, it was said that Mexico’s most popular active boxers were possibly heading to Las Vegas, and now we can confirm Canelo vs Chavez Jr is Vegas bound baby!

LatinoAthlete.com can confirm that HBO Pay-Per-View battle between Mexican superstars Saul “Canelo” Alvarez and Julio Cesar Chavez Jr is going down in Vegas.

The city of sin will be the setting for the Alvarez vs Chavez Jr boxing match at Las Vegas’ T-Mobile Arena.  The news of the fight was announced by Canelo on Friday.

As we previously told you, the two boxers are scheduled to fight on May 6th, as part of Cinco De Mayo weekend.  It was rumored that Dallas Cowboys owner Jerry Jones was making a strong play to secure the Canelo vs Chavez Jr fight, but that’s no longer happening.

Unfortunately for Jones, MGM (who own T-Mobile) made an offer that Golden Boy and Canelo could not refuse.

“It’s time for Las Vegas to have a fight of this magnitude on May 6, but we’ll see.”

The Canelo vs Kahn fight generated a live gate of $7,417,350, per figures released by the Nevada State Athletic Commission, from 13,072 tickets sold. This year the NSAC are expecting a sellout with the Saul “Canelo” Alvarez vs Julio Cesar Chavez Jr. fight.

If you love boxing, this is the must-see fight of 2017 on May 6th, presented by Golden Boy Promotions.

LatinoAthlete Staff - October 10, 2013
0
Miguel Cotto stopped Delvin Rodriguez in the third round Saturday night in a junior middleweight bout at Amway Center. Cotto improved to 38-4 with his...