Canelo Alvarez came and dominated the Mexico vs Mexico fight. The red-headed power-punching machine, Canelo beat Chavez Jr. He is now the national pride of Mexico!

LatinoAthlete.com proudly announces that Saul Canelo Alvarez (49-1-1, 34 KOs) is the victor of the Canelo vs Chavez fight.

Canelo Alverez legacy continues to grow with another battle notched in his belt. Saul has proved he is an unstoppable powerhouse fighter and that is why we love him. Coming from nothing shows us all the hunger, drive and determination one man can have, this is why he deserves the pride of Mexico title!

Last night’s fight was dubbed as a sparing match, since Canelo came to fight, while Chavez Jr. became the punching bag. It was a one-sided 12 round unanimous decision victory over weigh drained Julio Cesar Chavez Jr.

Saul Canelo Alvarez defeated former WBC middleweight champion Julio Cesar Chavez Jr. (50-3-1, 32 KOs). We told you earlier in the week that Chavez said he was training in high altitudes to get in better shape. It doesn’t sound like it was a smart way to train, and could be a major factor in his abilities in the ring. Bottom line, the Guadalajara, Mexico native cleaned up the ring with his fist-to-glove-power-punches taking out Chavez Jr. It was a 12 round unanimous decision victory at T-Mobile Arena in Las Vegas, Nevada. The final scores were 120-108, 120-108 and 120-108.

Canelo Alvarez weighed in after that fight saying, via a translator:

“Tonight I showed I could move, I could box, I showed as a fighter I can do all things. I thought I was going to showcase myself as a fighter that could throw punches, but he just wouldn’t do it. I’ve shown I can do lots of things in the ring, anything a fighter brings – I’ve shown I can showcase myself. I wanted to try something new, I never sit down in sparring and I didn’t want to sit here. GGG – you are next my friend. The fight is done. 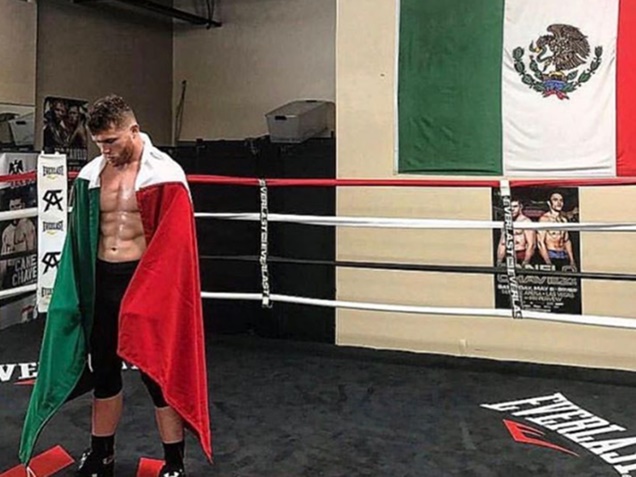 I’ve never feared anyone, since I was 16 fighting as a professional. When I was born, fear was gone. I never got my share of fear. I’m very happy, and the rivalry is going to show my skills even more. I’ve had difficult fights, and that will no doubt be a tough fight. But, I always say, Canelo Álvarez is the best because I fight the best.”

Julio Ceasar Chavez Jr. had this to say via Translator after the fight:

“Canelo beat me, he beat me at the distance. He is a very active fighter – he’s very good and he beat me. I wanted to box but he went to the ropes and I just needed to throw more punches. I would’ve attacked more I would’ve been countered by his punches.”

Chavez Jr. says that he realized the strategy that he brought into the ring was nothing compared to the force of Canelo.

He goes on to explain:

“Nacho told me to do that but the strategy didn’t work. The speed and the distance was the key. I didn’t feel that much power because I felt dwindled, I couldn’t throw as many punches as I wanted. My father kept telling me to throw more punches from the ringside.”

The Fighting Life: The Rise of MMA in Bahrain

LatinoAthlete Staff - August 20, 2015
0
A stranger in a strange land. Although it is absolutely cliché to be saying it as an American traveling abroad and landing in the world...