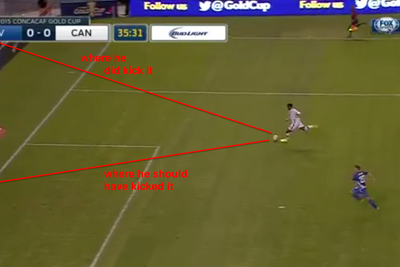 Canada’s Cyle Larin had the most perfect goal-scoring opportunity against El Salvador. The ball had doinked to him in completely open space, with defenders well behind him and just the goalkeeper to beat. He easily side-stepped the Salvadorean keeper, and it was just him and the net with all the time in the world.

Larin could’ve dribbled the ball in, or slowed down and lightly passed it in, but he decided to rush to smash it with his first touch. He may not have realized just how open he was. Larin was obviously devastated, pounding the ground and yelling FUCK after the miss.