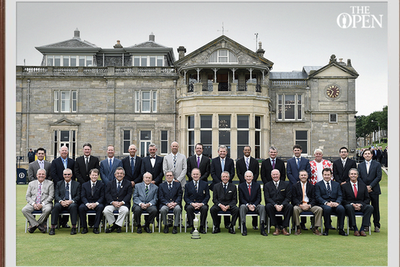 A St. Andrews tradition unlike any other — former champion golfers gather for a group photo around the 18th green. It’s a collection of wealthy men in bespoke attire and traditional colors.

Then there’s Open Champion John Daly. The 1995 winner at St. Andrews showed up for Tuesday’s photo in a garish red-and-white argyle blazer.

There’s only one John Daly! Past champions photo in front of the R&A. pic.twitter.com/al7kj9tc0b

The coat might actually be a step back from what he wore to the 2010 photo at St. Andrews.

Daly was also not hard to spot earlier in the day practicing, where he rolled around in shamrock pants with his Marlboro reds.

As a former champion, the 49-year-old Daly holds an exemption until he’s 60. So we should have more than a decade of JD taking his cuts at golf’s oldest and most distinguished major, which is a gift to us all.

Contributor - March 31, 2017
0
The big question right now is, Will Yadier Molina Meet His Game Day Deadline to get an extension contract with the St. Louis Cardinals? Everyone...