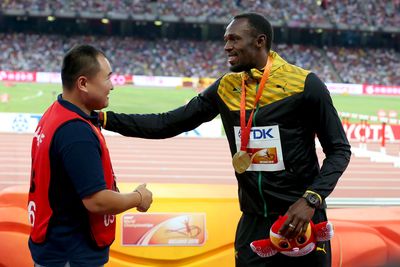 Just one day later, that cameraman is back at work (hopefully, he’s staying clear of any blood thirsty robots), according to the Guardian. His name is Song Tao and he works for CCTV. Tao filmed the medal ceremonies Friday.

“The important thing is that he [Usain Bolt] is OK. I’m fine and ready to get back to work,” Song told the Guardian via his colleague Shao Yi, who translated for him.

Yi went on to say that his buddy has become famous since the incident, as Tao “sheepishly” repeated he had to get back to work. Tao seems like a great guy who made an error that could’ve happened to any of us, sort of like the kid who punched a hole in that painting.

The pair shook hands before Bolt’s medal ceremony amid smiles all round. Song appeared to give Bolt a good luck charm to wear around his wrist.

Per the Guardian, there were also other shenanigans happening during the same victory lap where Usain Bolt was slammed to the ground by a rogue robot:

It was not the only mishap on Bolt’s eventful lap of honor. As one fan invaded the track to try and grab a picture with Bolt, before being chased away, another volunteer attempted to make off with Bolt’s spikes.

Stay safe out there, Usain, seriously.

LatinoAthlete Staff - July 26, 2015
0
John Smoltz's induction into the MLB Hall of Fame Sunday included a speech with a bunch of fun stories from his life...