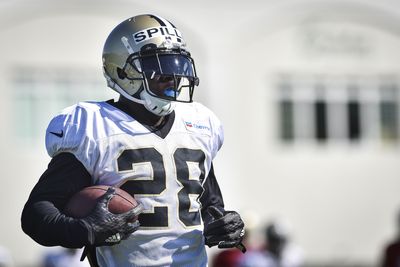 C.J. Spiller had arthroscopic knee surgery and is expected to miss the remainder of the preseason, Washingtin is running out of healthy tight ends and more from the NFL on Saturday.

New Orleans Saints running back C.J. Spiller underwent arthroscopic knee surgery on Friday, according to ESPN’s Adam Schefter. Spiller is now expected to miss the remainder of the preseason, but the team does expect him back for the regular season opener against the Arizona Cardinals on Sept. 13.

Spiller did limited work in training camp earlier in the week, missed a scrimmage on Friday and did not participate in the team’s preseason opener against the Baltimore Ravens. Spiller joined the Saints this season after five seasons with the Buffalo Bills, who took him with the No. 9 overall pick in the 2010 NFL Draft.

A solid runner who can also contribute in the passing game, Spiller didn’t quite work out as a feature back in Buffalo, but seems to fit a lot better as a supplemental piece in a Drew Brees-led offense. Mark Ingram is the starter in New Orleans, and Spiller figures to be a big part of the offense in both the running and passing game. He just needs to get healthy first.

Here are some other notes from around the league on Saturday:

Washington is running out of tight ends

Heading into Thursday’s preseason game against the Cleveland Browns, Washington had Niles Paul as the starting tight end, a hamstring injury hampering backup Jordan Reed and an uncertain future for Logan Paulsen due to a toe injury. There were also a couple backups, including Je’Ron Hamm.

Unfortunately, Paul sustained an fractured ankle in the game, and will miss the entire 2015 season. After the game, Washington announced that Paulsen will require surgery on his toe and will also miss the entire season. Hamm sustained an injury during the aforementioned game as well, though his is less serious. So for now, the top tight ends are Reed and Hamm, and neither are 100 percent healthy at this stage. It’s rough being a tight end in D.C.

Giants safeties also have it rough

The New York Giants had a tenuous safety position heading into Friday’s preseason game, and coming out of it things were even worse. Rookie Landon Collins left the game with an injury, and on Saturday, head coach Tom Coughlin confirmed he has an MCL sprain and will need to miss some time, as reported by NFL.com. It seems like a mild sprain, but it’s possible he won’t play again this preseason.

Then there’s Mykkele Thompson, who left the game with an Achilles injury. Coughlin also confirmed that Thompson’s injury was more serious, and that he’ll miss the entirety of the regular season. New York’s secondary was already a big question mark, and now it’s even worse. In addition to the safeties, cornerbacks Jayron Hosley and Trumaine McBride sustained injuries in the game. Neither injury seems long-term but they could miss some time.

Cobb will get times with starters

Tennessee Titans running back David Cobb will get work with the first team in the preseason, head coach Ken Whisenhunt said on Saturday, via Paul Kuharsky of ESPN. Whisenhunt said that Cobb deserves it, and that he just needed to get in shape before getting the opportunity. It’s hard to argue with the fact that he deserves it after an impressive showing in the preseason opener on Friday.

Starter Bishop Sankey carried the ball eight times, but only managed 15 yards, a per-carry average of 1.9 yards. Cobb had 11 carries, and managed 53 yards, an average of 4.8 yards per carry. Of course, Cobb was going against a defense that was primarily made up of second- and third-string players, while Sankey played against the bulk of Atlanta’s starters. Still, Cobb is one of the more exciting running backs to come out of this year’s draft.

The Dallas Cowboys are set to work out Ben Malena, Michael Hill and Zach Bauman, according to ESPN’s Todd Archer. All three players are running backs, the position Dallas needs help at the most. The Cowboys had DeMarco Murray last season, but when he left in free agency the team signed Darren McFadden, who promptly got injured.

McFadden did return to training camp on Saturday, but the team also is dealing with injuries to Lance Dunbar and Joseph Randle, along with undrafted free agent Gus Johnson. Johnson sustained a separated shoulder in Thursday’s preseason game against the San Diego Chargers. While the Cowboys still need to figure out who will be the starter, one of Malena, Hill or Bauman would provide some much-needed depth for the preseason.

The Chicago Bears will lose rookie wide receiver Kevin White for a portion of the regular season due to a stress fracture in his shin, and starter Alshon Jeffery is dealing with a calf strain. Fortunately, it looks like Jeffery’s injury isn’t considered long-term and will only force him out of some training camp practices and the team’s upcoming preseason game against the Indianapolis Colts, as noted by Rich Campbell of the Chicago Tribune. Jeffery will be Jay Cutler’s top target this season, and the team will likely be extra cautious with him moving forward.

LatinoAthlete Staff - August 23, 2015
0
Texas Rangers' Adrian Beltre was up to no good again last night, this time in Detroit. Adrian Beltre, adopting the "Nope, nothing to see...