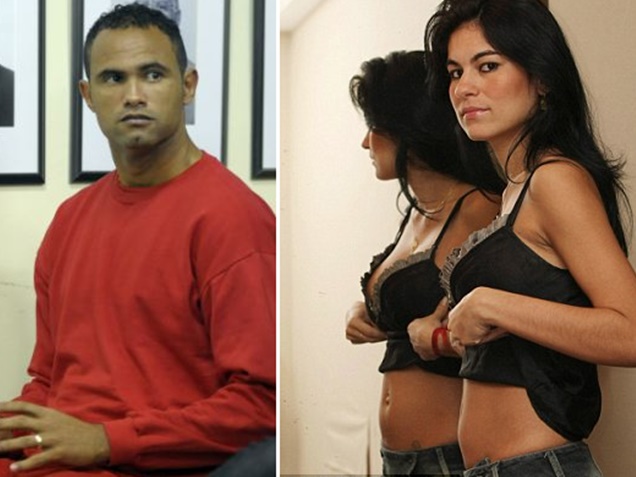 It’s been seven years since since Brazilian soccer goalie, Bruno Fernandes de Souza murdered his ex-girlfriend and then fed her to dogs. Now, he responds to his horrendous crime of 2010.

LatinoAthlete.com has learned that Bruno Fernandes de Souza wants people to forget about the way he murdered his ex-girlfriend!

Bruno Fernandes de Souza just wants people to forget about how he murdered his ex-girlfriend murdered and fed to dogs so he could revive his soccer career.

He told the The Guardian [via NYDailyNews]:

“I made a mistake, a serious one, but mistakes happens in life – I’m not a bad guy. People tried to bury my dream because of one mistake, but I asked God for forgiveness, so I’m carrying on with my career, dude.”

If you recall, Fernandes de Souza ordered the murder of his then girlfriend, Eliza Samudio. Eliza was tortured, beaten and strangled before her body was chopped up and fed to a pack of Rottweilers back in 2010.

He was sentenced to 22 years in behind bars in 2013 for his part in the crime. Unfortunately, he is a free man today. Apparently he was let out a legal technicality after just six years in prison.

Despite the grusome murder, can you believe that Fernandes de Souza just signed to a two-year contract by second-tier Brazilian soccer club Boa Esporte?

Despite the fact that he just signed the OJ Simpson of soccer, Boa Esporte president Rone Moraes da Costa doesn’t care he has a killer like Aaron Hernandez playing on his team.

“If this city doesn’t like it, I move us to another city. Bruno deserves this chance.”

Basically, this man got his girlfriend pregnant and instead of taking care of his child he had his child’s mother murdered in one of the most horrific ways straight out of a Saw movie.

Soccer player dribbles past a billion defenders, scores with ease