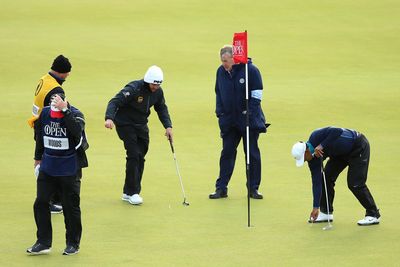 A mistake was made on Saturday morning and the R&A is trying to get out and front and defend their decision.

The Open Championship remains in a wind delay at St. Andrews and five hours removed from the decision to pull the players off the course, the controversy over starting at all remains the highlight of Saturday. The players were put in place at 7 a..m. in winds that gusted around 45 mph with the flags whipping.

With the greens running faster than normal and the pins in high spots to avoid the water that was collecting at the start of the second round on Friday morning, playing championship golf became a problem right from the restart. Down in the most exposed part of the course, specifically at holes 8 and 11, the balls would not stay still in their spot on the green. They oscillated in other spots on greens all over the course and Brendon Todd described the nerve-wracking process of standing over the ball and thinking it was going to blow back into your putter blade.

It was too windy to play golf but everyone on the course had to deal with it, right?

Well, not really and that’s the major issue with the R&A, the ruling body that operates The Open, deciding to start play Saturday morning. The groups at the 11th hole, the green that was hit the hardest, did not play a single shot — for all 33 minutes. Meanwhile, Dustin Johnson, who started with a one-shot lead, played eight shots over two holes. One of those shots included a chipped ball onto a green that was blown off and rolled down a hill.

DJ was understandably pissed that they restarted at all. He made a bogey there when his ball got blown away on a par-5, holes he typically carves up with his length. But the bigger issue than having to play in those absurd winds is that the R&A didn’t call it IMMEDIATELY when one hole wasn’t playable.

The R&A tried to get out in front of it early when the players started coming off the course furious at all the rules officials and the decision to play.

An update from The R&A on the state of play at #TheOpen. pic.twitter.com/4LvIixxPI6

Groups backed up at No. 11 and didn’t play a shot while others played a couple holes and some finished their round, including Todd, who hovered right on the cut line as he putted out at the 18th green. The players were most upset with this aspect of the restart disaster this morning.

More than disappointed in the R&A. Some groups hit only 1 shot while others played on. It needs to be a fair contest and wasn’t this morning

Bit of a strange decision here @TheOpen . They seemed to stop play out on 11 and allowed the rest of us to carry on playing.

The mistake will probably make them extra cautious going forward and we’re now five-plus hours into a delay with the winds just as bad, if not worse, than they were this morning. (UPDATE: The R&A announced they won’t even try to get this done over the weekend, setting the schedule the for a Monday finish.)

Every year at The Open, one side of the tee times draw will get the unlucky side of the weather shifts. It sucks for those players but that wasn’t the issue this morning. The problem was that players on the same side of the draw on the course at the exact same time did not all have to play in the same conditions. That’s when you get words like “unfair” and “injustice” thrown around.

LatinoAthlete Staff - June 14, 2015
0
The first day of the 2015 College World Series featured the ACC and SEC splitting two games, with both Virginia and Florida...