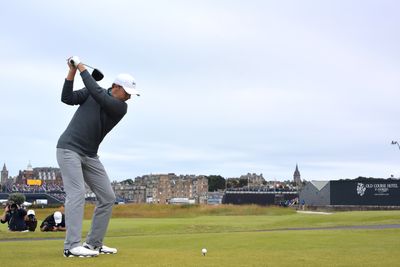 The Grand Slam is alive at The Open Championship, where Jordan Spieth starts Monday’s final round a shot off the pace set by two world class superstars and an incredible unknown longshot.

For the second straight major championship, Jordan Spieth will play in the penultimate tee time of the final round. Spieth went out in the second-to-last group of the day just month ago at Chambers Bay, and that worked out pretty well for him. He’ll play Monday’s delayed finish at the British Open with Jason Day, who was in the final group behind him a month ago, at 9:20 a.m. ET (2:20 local) at St. Andrews.

Spieth’s chase for the Grand Slam will consume the early-round coverage on Monday. He may be one shot off the lead, but the fact that the Slam is even still in play is an extraordinary accomplishment. His third round on Sunday featured an awful bogey at the 9th hole that left him furious and going the wrong way on a clustered world-class leaderboard. But he responded with three straight birdies to start his inward nine, and now he’s close to becoming the first player since Ben Hogan in 1953 to win the first three majors in the same season.

One group behind Spieth and Day will be Louis Oosthuizen and amateur Paul Dunne, who played together in Sunday’s third round as well. They, along with Day, share the lead at 12-under after a third round that yielded birdies at every turn on a calm day at the Old Course. Oosthuizen is the “defending champ” of sorts, winning the Open by a runaway seven shots the last time it was held at St. Andrews in 2010. Dunne, on the other hand, was a 1500/1 shot at the start of the week and a player who is 80th in the amateur world rankings, not the world rankings. The final pairing in the last round of a major is obviously the biggest stage of his life and he’ll feel unimaginable pressure bringing up the rear at 9:30 a.m. ET with Oosthuizen.

If the wind stays down again on Monday, and with the continued rain keeping the course soft, a player four or five shots back can make a run up the board and get back in it while the leaders are still on the driving range. Spieth was 90 minutes ahead of the final group on Sunday and put a charge in the crowd to get to the lead just as the final tee time of the day was getting into their round. Someone farther down the tee sheet could have that opportunity on Monday, but the headliner is Spieth.

The R&A is keeping the tee sheet on a normal schedule as if this were a Sunday at The Open. Since that 10-hour delay on Saturday, they made an early announcement that they would make no real effort to scramble and make up ground with a 36-hole day, split tees or groups of three. They were comfortable settling for the first Monday finish at The Open since 1988. So they will go off in 10-minute increments on Monday in no real rush, aiming for a 1:30 to 2 p.m. ET finish (7 p.m. in Scotland). Your tee times for the final round (All times ET):

US Open 2015: Schedule, TV coverage and live streaming for Day...

LatinoAthlete Staff - September 4, 2015
0
Novak Djokovic and Serena Williams will both be playing in third-round action at the US Open on Friday. The third round of...