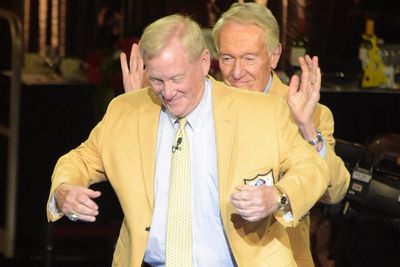 Bill Polian thanked everybody conceivable, from NFL owners to the low level employees that make franchises run like well-oiled machines.

Bill Polian was inducted into the Hall of Fame as an executive and contributor, and gave a speech at the enshrinement ceremony on Saturday. It was a longer speech, as Polian paid attention making sure he thanked every single person he could think of before it was all said and done.

Polian started out by thanking the committee for “making this day so special,” and then thanked NFL commissioner Roger Goodell for his “help and friendship through the years.” There were some boos from the crowd when Goodell’s name was mentioned.

“Congratulations to my classmates on this well-earned honor. And you saw earlier why we all love Charles,” Polian said, likely referencing a funny story told by Charles Haley in his speech which was also on Saturday.

“It starts with family. My parents, grandparents and aunts,” Polian said, “A journey that began on a boat from Ireland led to Canton. I don’t think they would have believed it, but I know they’re proud.”

Legendary coach Marv Levy presented Polian at the ceremony and in a video package from NFL Films. He had a great quote about Polian, saying “He just made that entire machine function in a matter beyond belief.”

Polian’s thanks extended deep, to basically every single kind of employee that works for an NFL team, from the very top all the way down, which is just another example of his attentiveness and control over an entire organization’s structure. He kept his eyes on everything and that’s why things ran so flawlessly when he was in charge in Buffalo and Indianapolis.

“I’m being inducted as a contributor, but in truth, this game and the NFL have given me far more than I’ve given it,” Polian said. He went on to thank NFL owners, including Jim Irsay, Jerry Richardson and Ralph Wilson. He said that he owes Wilson a debt he can never repay.

After talking about all the coaches and other executives he’s worked with he got to Tony Dungy, who won a Super Bowl with Polian in Indianapolis.

“We never doubted for a minute that throughout all the heartache and heartbreak, that we would win a Lombardi Trophy,” Polian said of Dungy and his time with the Colts.

Polian also named several Colts players, saying that all of them should earn consideration for the Hall of Fame. Jeff Saturday, Dallas Clark, Dwight Freeney, Reggie Wayne, Marvin Harrison and Peyton Manning were all named.

“If you keep playing, I may not be around for your introduction, but wherever I am, I’ll be proud,” he said to Manning.

“To all the players and coaches from all our teams, it has been such a joy to see you grow,” Polian said, “We share a lifelong bond that will never be broken. We shared experiences which few ever do and which we will never forget. My honor is your honor. I stand here on your shoulders. I am here because of you, and I am forever grateful.”

Finally, he thanked Levy, saying he represents all Polian ever aspired to be.

Polian is widely regarded as one of the best talent evaluators in the history of the sport. His front office resume saw him work with the Buffalo Bills, where the team made it to four consecutive Super Bowls and the Indianapolis Colts, where he helped build one of the most dominant franchises in recent memory. He was the general manager of the Bills from 1986 through 1992, and was with the Colts as a general manager and later the team president from 1998 through 2011.

Polian’s first pick as general manager of the Colts was a winner — Peyton Manning, and he rode that success through his tenure there. He has a Super Bowl win to his name (Super Bowl XLI), and is also a member of the Bills Wall of Fame.

LatinoAthlete Staff - July 28, 2015
0
Good morning! This is your daily roundup of NFL stuff. WHO RUN THE WORLD: Jen Welter is the name of the former indoor...