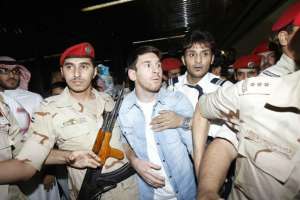 The state prosecutor Raquel Amadao said that Messi and his father, Jorge Horacio Messi, used a network of offshore companies to avoid paying Spanish taxes on some of his advertising contracts.

The complaint focuses on Spanish tax returns filed between 2007 and 2009, but the prosecutor is accusing Messi’s father of setting up offshore structures to dodge taxes on some of his son’s publicity contracts as early as 2005, when Messi was still underage. Messi, who will be 26 later this month, is from Argentina but moved to Spain when he was 13. He denied any wrongdoing.

“We are surprised because we have never committed any infringement,” Messi wrote on his Facebook account Wednesday.

The complaint against Messi comes amid a crusade by Spain’s cash-strapped authorities against on tax evasion. A prolonged recession has also reduced Spain’s tax revenues and made it harder for the country to clean up its public finances and comply with budgetary targets agreed with Brussels. Over the past two years, dozens of fraud court cases have been launched, centering on politicians, businessmen and even the son-in-law of King Juan Carlos.

Last month, the government said that tax payers had declared assets held abroad worth 87.7 billion euros, or $117 billion, equivalent to 9 percent of the country’s gross domestic product, in line with legislation passed last year that set much more stringent rules on the disclosure of overseas assets.

The finances of Spanish soccer have also been in the spotlight as the economic crisis has deepened, with the country’s clubs owing the Finance Ministry about 750 million euros in taxes, as well as accumulating 16.6 million euros in late social security payments.

Many of Spain’s struggling clubs have complained about the uneven split in television and other revenues, with Barcelona and Real Madrid receiving about half the total under the current TV licensing system.

This year, Messi extended his contract with Barcelona by another two years. He has won four FIFA world player of the year awards and recently led Barcelona to another Spanish league title, despite struggling with an injury toward the end of the season.

The prosecutor filed the complaint with a court in Gava, a suburb of Barcelona where Messi lives. A local judge must now decide whether the complaint justifies starting a trial. Under Spanish law, a conviction for large-scale tax evasion can result not only in a hefty fine but also jail sentencing for as long as six years.

LeBron James casually drilled a shot from his courtside seat

LatinoAthlete Staff - July 18, 2015
0
So LeBron James won't stop being great at everything all the damn time. Here he is, minding his own business in Las Vegas...