Things are not looking good for former New England Patriots tight end Aaron Hernandez. The double murder trial has begun and the evidence is piling up against him.

LatinoAthlete.com has the latest on Aaron Hernandez and what has developed over the first two days in court. Bottom line, things are not looking good for the 27-year-old lifer.

We’ve already reported that the prosecution has Hernandez’ gun tattoo’s, the artist, and the Mike Pouncey calls as evidence for the 2012 double murder trial. But did you know they also have Aaron’s ex-friend he shot in the head and left for dead?

The only problem for Aaron Hernandez is that Bradley didn’t die!

Alexander Bradley is now testifying against Hernandez, so it could be safe to say, Bradley is understandably pissed at Hernandez. What was Aarron Hernandez reason for attempting to murder his friend?

“Bradley has said he was with Hernandez when he allegedly shot and killed de Abreu and Furtado following a seemingly minor incident in a Boston nightclub that resulted in Hernandez’s drink being spilled. Bradley claims that Hernandez took the interaction as a sign of disrespect and later opened fired on the pair’s car when they ended up alongside each other at a stoplight later in the night.” – ProfootballTalk

Now, he’s become a key witness in the double murder trail, because he has inside information that could land Hernandez two more life sentences. He was heard telling the prosecutors stuff like this:

“Hernandez’s former friend Alexander Bradley—who was with Hernandez on the night in question—told police Hernandez taunted the victims after shooting them. The prosecution claims he yelled “What’s up now?” at them.”

This takes it back to the Police alleging Hernandez shot both Daniel de Abreu & Safiro Furtad dead in their vehicle after the former Patriot told his friend the two men “tried” him in a nightclub.

The prosecution made these claims during the Aaron Hernandez Double Murder Trail:

In addition to all the evidence thus far, is a photo released by the prosecution that shows Hernandez & Bradley together near the double murder scene in Boston. The same night as the drive-by killings. 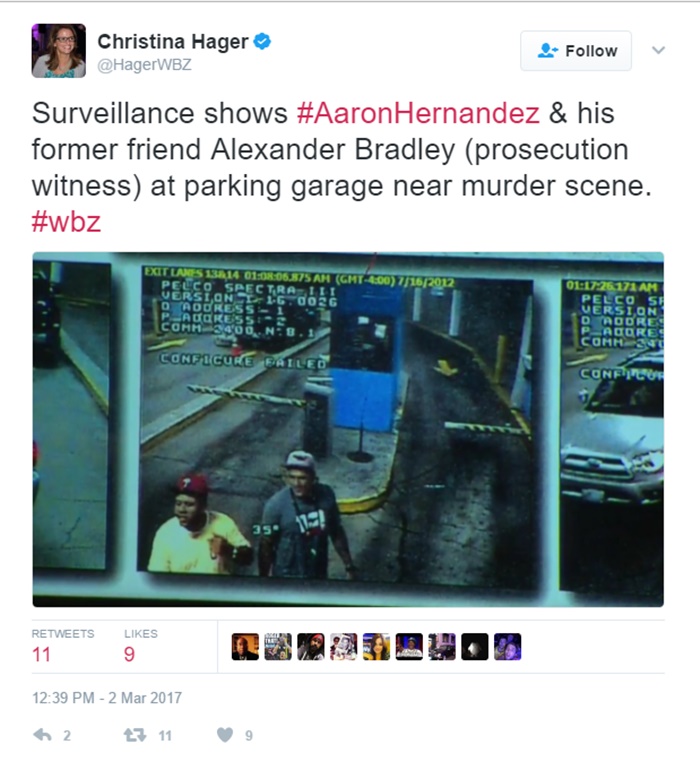 Hernandez apparently had everyone fooled. He was a pro football player in the day and a cold-blooded killer at night. So crazy!

What is throwing us off is that Hernandez was seen walking around courtroom laughing and slapping his defense on the backs?

The trial is expected to last four to six weeks.