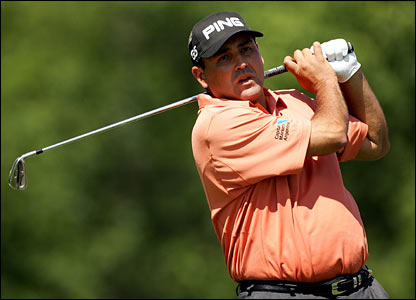 Former major champions Angel Cabrera and Louis Oosthuizen were among seven players announced to play in next week’s Travelers Championship at TPC River Highlands in Cromwell.

Other players announced were Bo Van Pelt, Ryan Moore, Jerry Kelly, Harris English and Camilo Villegas, all of whom will tee it up beginning June 20.

Oosthuizen won the 2010 British Open and finished second in the 2012 Masters. At No. 9 in the current world rankings, Oosthuizen is the second highest-rankd player in next week’s field behind Justin Rose at No. 5. Oosthuizen tied for 47th place in his only other appearance at the Travelers last year.

Cabrera has three major titles to his credit and lost in a playoff to Adam Scott at the Masters in April.  Cabrera tied for 84th at his first Travelers appearance last year.

English won his first PGA Tour event this past weekend at the FedEx St. Jude Classic. Van Pelt, ranked 28th in the world, is making his 11th appearance at the Travelers, finishing in the top 25 six times. Moore is making his eighth straight appearance at TPC River Highlands and he has three top-10 finishes.

Villegas is making his third appearance at the Travelers. He has three tour wins to his credit. Kelly, the former University of Hartford standout, makes his 16th appearance at the tournament with a pair of top-10 finishes