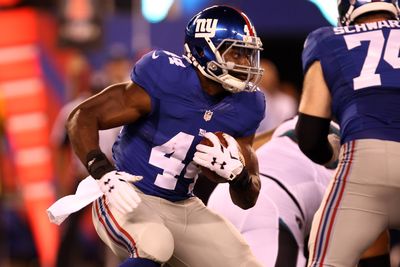 It appears that the Giants could once again look to sophomore running back Andre Williams when they get deep in opponents’ territory. We break down the fantasy implications.

New York Giants running back Andre Williams has the best chance to lead the team in carries inside the 10-yard line, according to beat reporter Dan Graziano.

This was the case in 2014, although Graziano concedes much of that was due to incumbent starter Rashad Jennings‘ nagging injuries. The Giants have rotated running backs throughout camp during goal-line drills, but Williams’ power makes him a good candidate to lead the team, as well as his history of being able to cash in. Williams scored six touchdowns during his rookie season, and would also likely handle the early-down work should injury plague the 30-year-old Jennings once again.

Fantasy Spin: Williams doesn’t come without his share of concerns, chiefly among them being that he remains part of a committee backfield approach. But the fact he can be had as late as the 12th round gives owners plenty of incentive to take a player who could become an every-down back if Jennings, an aging back with a lengthy injury history, were to miss time.

For now, Williams should be treated as one of fantasy football’s premier handcuffs, but it would be to the surprise of no one if he has a few games with feature-back duties in 2015.

British Open TV schedule 2015: Coverage of Thursday’s first round at...

LatinoAthlete Staff - July 16, 2015
0
The action will get underway bright and early with ESPN handling the coverage. The 2015 Open Championship gets underway from St. Andrews...