The Alliance of American Football will begin play on February 9th, 2019. CBS will be the league’s broadcast partner which will put two professional football leagues (the other being the NFL) under the network’s portfolio. The league is being run by television producer Charlie Ebersol and a host of former NFL players and executives. Some consider the AAF to be a potential competitor to the NFL while others say it’s both an alternative and an opportunity for players who struggled to crack the NFL ranks. I say it could be all three.

The league will have eight teams mostly centered in the southern and western United States. They also happen to be launching almost exactly one year before Vince McMahon opens up the second version of the XFL. Many “alternatives” or “competitors” have come and gone over the years, but the AAF plans to use today’s modern technology and the power of social media to help them stay in business. In this day and age, technology and social media are vital to any business.

Recently the league announced the signing of 500 players. Many of these players were either college standouts who never got their shot, played in other leagues, or only played in NFL preseason games before getting cut. There are a few Latinos among this group of players, and here’s a closer look at these athletes who look to be successful in the AAF….

Castillo was a standout at West Texas A&M who was practically automatic when it came to making field goals. The Atlanta Falcons gave him a look in 2014 but he wasn’t able to land a roster spot. The California native found a home in the Canadian Football League where he played for the Winnipeg Blue Bombers, Ottawa Redblacks, and the Hamilton Tiger-Cats from 2015 to 2017 where he played both punter and place kicker. He scored 142 points as a kicker and averaged 45 yards per punt.

Now he returns to the U.S. and the state that propelled him to college stardom.

“Cheeto” as he was called started his college career at Texas El-Paso before transferring to Texas State. After his career with the Bobcats he signed on with the Indoor Football League where he has quite the highlight reel. Now he’s found his way back onto the outdoor field, albeit at the professional level this time.

Banderas was a four-year starter at Nebraska from 2013 to 2016 where he played in 31 games. While manning the Cornhuskers defense Banderas gathered 232 total tackles, 17 1/2 tackles for loss, 2 1/2 sacks, and three pass deflections. The Denver Broncos signed him as an undrafted free agent in 2017 but was ultimately among that year’s final cuts. Now the Stallions are giving him a second chance and they’re getting a solid player.

At Nebraska Banderas held his own against some of the best college football talent on a weekly basis. He’s good against the run and he’s tough to block.

After a whirlwind college career in which he started at Texas A&M, transferred to Kansas, was dismissed from Kansas, and finished his schooling at Southeastern University (NAIA) in Florida, the Los Angeles Rams gave him a shot as an undrafted free agent this year. He was let go after the preseason, but he put enough on tape to catch the attention of the AAF. He’ll be running routes and catching passes for the Fleet come February.

Hopefully the league will add more Latino players as the February kickoff date rapidly approaches. So far they’ve started off in the right direction. 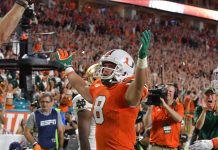 After the NFL Draft, new Latino players enter the league

LatinoAthlete Staff - August 20, 2015
0
Not quite as good as Lefty, but a great result. A severely-slopped downhill lie near the green is one of the most...