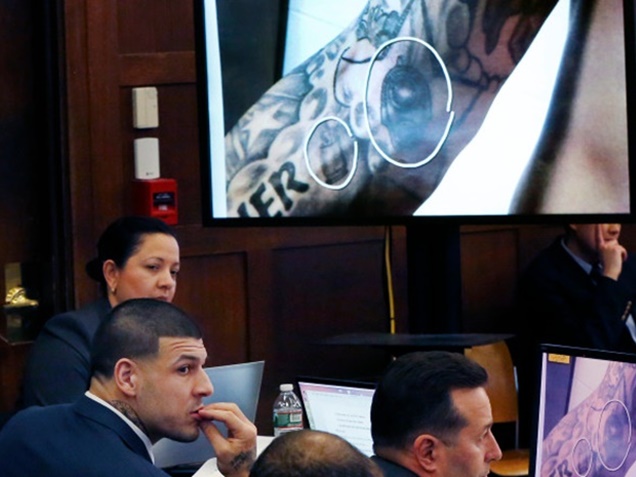 LatinoAthlete.com has the latest details from the courtroom of the Aaron Hernandez double-murder trial since Alexander Bradley testified against Hernandez.

According to the prosecutors all it took was a minute-confrontation with the former NFL star Aaron Hernandez to shoot and kill two Boston clubgoers said Bradley. What they didn’t realize is that their accidental bump in with Aaron Hernandez would get them killed later that night.

In a detailed account of what happened on July 2012, Alexander Bradley say Hernandez shot and killed Safiro Furtado and Daniel de Abreu while they sat in a car outside a Boston nightclub.

Hernandez felt that they TRIED him in the club so now he faces two murder charges the killing of two immigrants from Cape Verde.

Now Hernandez “loose end” reignited what had been a cold case since Hernandez has pleaded not guilty to the slayings.

Relatives of the men wept as Bradley testified, prompting Judge Jeffrey Locke to call for a brief recess at Suffolk Superior Court.

“What’s up now?” before firing. The former New England Patriots tight end is accused of killing de Abreu after he accidentally bumped into Hernandez and spilled his drink at the club. After the killing it’s alleged that Aaron decided to tie up loose ends so he attempted to kill Bradley by shooting him in the face months after the double murder. According to reports the former Patriots star became worried that Bradley would tell authorities about the earlier shootings. Bradley lost an eye in the shooting.”

Bradley added to his testimonial that Safiro Furtado and Daniel de Abreu left the club and moved to another bar across the street. They believed they were being followed so de Abreu was spotted with his group of friends:

Hernandez said that he hated when people “try me” or “try to play me.”

On Friday, the jury viewed and listened to the tattoo artist who inked an image of a gun and the phrase “God Forgives” on the former Patriots star.

David Nelson, who operates Make Luck Tattoo shop in Redondo Beach, Calif., identified the tattoos he inked for Hernandez when the tight end visited the shop.

“Just like any other client, he came in, told me what he wanted and where he wanted it. He wanted a front view of a pistol, like it’s pointing at you, the cylinder part of the revolver that holds the bullets and some words on his hands: ‘Blood, sweat, and tears.’”

“Sometimes people get tattoos because they like a certain things. Sometimes they want to say something, sometimes they put tattoos on themselves for decorative purposes.”

Bottom line, Herandez tattoos are like road maps, awards or markings for successful kills on his arm. It’s been said that gang members then to ink themselves to tell stories or WARN other not TRY them! We guess, The former tight end allegedly inked himself as a message?

LSU game cancelled due to lightning, won’t be made up

LatinoAthlete Staff - September 6, 2015
0
LSU will only play 11 games this season. Shortly after LSU's game against McNeese State got under way, it was delayed due...