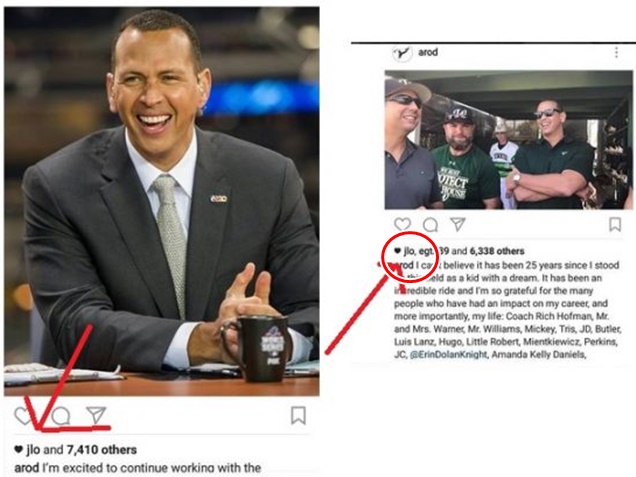 Alex Rodriguez and Jennifer Lopez dating is all the talk today after early rumors surfaced on the Internet by two websites that had the news first.

A-Rod and Jennifer Lopez were rumored to be romantically linked [via TerezOwens and CelebNLatin247]. Then today, more evidence surfaced that the rumors are true.

On Wednesday, Alex Rodriguez announced that he landed a new job, since he retired from the New York Yankees. The MLB slugger took to the gram to announce his happiness about joining the FOXSports family as the baseball analyst.

“I’m excited to continue working with the @FOXSports family. It’ll be great to get back on the set with the guys for the regular season and postseason, especially the All-Star Game in my hometown of Miami.”

After the former MLB star A-Rod announced the news on the gram, Jennifer Lopez liked the post [via TO].  It appears that Alex is a slugger on and off the field.

In addition, The “Shades of Blue” star Lopez recently shot down rumors she was dating rapper Drake.

Then, she appeared on the “The Daily Show With Trevor Noah,” where she dished the dirt:

Of coure, the news has been spreading like wildfire after both original sources spilled the tea. PageSix and other outlets have jumped on the news calling it an exclusive when in reality they took the story from TO.

Meanwhile, sources leaked that A-Rod and J-Lo have been seeing each other on the low.

“They have been seeing each other for a few months — and were together in LA this past weekend. They are really into each other because they have so much in common — from their Latin roots, to their love of New York, and their kids.”

The first news of Rodriguez, 41, and Jennifer Lopez being an item started spilling after A-Rod was spotted backstage at one of J.Lo’s Las Vegas gigs. It was during Lopez’ “All I Have” residency at Planet Hollywood.

What do you think about Jennifer Lopez and Alex Rodriguez Dating?

Blake Bortles, Derek Carr, Teddy Bridgewater should be in store for...

LatinoAthlete Staff - September 9, 2015
0
What kind of production can we expect from last year's crop of rookie quarterbacks? In the last 10 seasons, a passer...