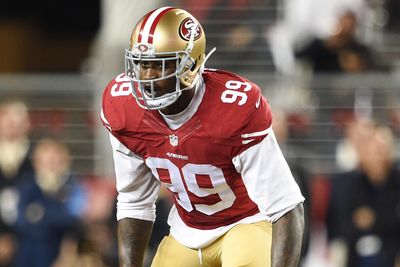 After being bailed out of jail, Smith denied that he was driving under the influence, stating that “the truth will come out.”

San Francisco 49ers linebacker Aldon Smith has been arrested again, according to reports. He was booked into Santa Clara County jail on $26,000 bail Thursday evening and bailed out Friday morning. The Santa Clara Police Department announced Friday morning that Smith was arrested for suspicion of DUI, vandalism and hit and run.

Smith was released by the 49ers later in the day. The team released a statement pledging its ongoing support to linebacker.

“This organization has tried very hard to help Aldon fight his issues. Although he is no longer a member of this team, our support and concern for him will continue.”

As he was leaving jail, Smith told Janine De la Vega of KTVU that he was not driving under the influence, adding “the truth will come out.” He apologized in a video recording of his interview.

“I’m sorry for anybody I let down,” Smith said. “I need to speak, and I want everybody to understand that this wasn’t a DUI. The situation that I had could have been handled differently, and I apologize for everybody I did let down, and I apologize for how it all played out. As far as everything is concerned, it’ll work out how it’s supposed to work out.”

On Thursday, August 6, 2015, at about 8:46 PM., Santa Clara Officers were dispatched to Moreland Way to investigate a disturbance involving a collision. On arrival, officers learned Aldon Smith was parking his vehicle and collided with a parked vehicle. After the collision, Smith exited his vehicle and caused additional damage to the parked vehicle with his car door.

Smith then left the area not reporting the collision or leaving his identifying information at the scene. He later returned to the parking area where he was contacted by officers. Smith displayed objective symptoms of being under the influence of an alcoholic beverage. Officers administered a field sobriety test to Smith.

Smith was then arrested for being under the influence of an alcoholic beverage (DUI), Hit&Run, and Vandalism. He was transported to Santa Clara Police Department for processing and later transported to the Santa Clara County Jail.
Smith did provide a PAS (preliminary alcohol screening device) sample, but the results cannot be released at this time as per our policy.

Smith has had several run-ins with law in the past. According to Matt Barrows of the Sacramento Bee, he has been arrested five times since 2012, beginning with a DUI in Miami. In 2013, he turned himself in to authorities on felony gun charges stemming from a house party gone wrong. When he turned himself in, he was on a voluntary leave of absence from the team for another DUI arrest. In 2014, he was arrested after making a false bomb threat at LAX airport.

Smith was suspended nine games during the 2014 season for violations of the NFL’s personal conduct and substance abuse policies. He returned in Week 11 and recorded 15 tackles and two sacks in seven games.

Smith may be subject to further punishment, depending on the nature of his most recent arrest. Besides a possible suspension in addition to his release, David Fucillo at Niners Nation points out that Smith could also be given jail time for violating his probation, one of the terms of which was a ban on alcohol.

Smith stands to lose a lot of money. He is currently on a one year contract worth $9.754 million that was restructured during the offseason to convert his pay into a series of non-guaranteed roster bonuses and a smaller base salary. The restructuring was essentially a bet Smith made on himself that he would stay out of trouble. Releasing Smith will cost the 49ers $1.6 million against the salary cap, according to Spotrac.

“Aldon’s like any young player, he’s growing up, he’s maturing,” Baalke said. “You see that with a lot of these guys. Some of them get themselves in a few more situations that you wish they didn’t. If you asked them, I think they’d say the same thing. Really pleased with the way he’s handled things, the way he’s working both personally and professionally.”

Smith’s arrest continues a tumultuous offseason for the 49ers. Since letting go of head coach Jim Harbaugh at the end of the 2014 season, the team has seen linebackers Patrick Willis and Chris Borland, defensive end Justin Smith and offensive tackle Anthony Davis all retire. Other long-time standbys like running back Frank Gore and offensive guard Mike Iupati left for other teams.

Smith has been a bright spot on the football field for San Francisco. Since being selected No. 7 overall in the 2011 NFL Draft, he was named to Pro Bowl and as a first-team All-Pro during the 2012 season, and became the fastest player in NFL history to record 30 career sacks by doing it in 27 games. His 19.5 sacks in 2012 were a 49ers single season record. Since then, he has 10.5 sacks in 18 games across two seasons.