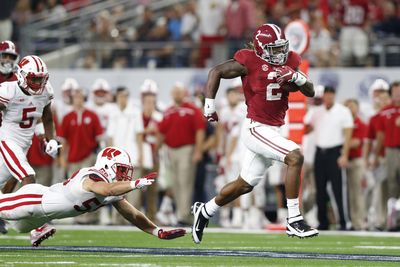 Alabama deployed its usual formula of a punishing running game and stingy defense to grind down Wisconsin at Jerryworld.

The No. 3 Alabama Crimson Tide started off the 2015 season with a bang, squeezing the life out of the No. 20 Wisconsin Badgers, 35-17, at AT&T Stadium in Arlington, Texas. Alabama racked up 238 rushing yards and got three touchdowns from Derrick Henry in the lopsided victory.

It was an even affair for most of the first half, with neither team really pulling away. Alabama opened the scoring when Henry broke an arm tackle on fourth-and-1, rumbling for a 37-yard touchdown, and the Crimson Tide took a 14-7 lead into halftime. Wisconsin nearly made it a four-point deficit before the break, but Rafael Gaglianone’s 34-yard field goal attempt bounced off the upright.

That would be the Badgers’ last chance to stay in this game. Henry broke things wide open on the Tide’s first drive of the third quarter, taking this handoff 56 yards to the house.

After that, the rest of the game was merely a formality. Henry completed the rout with his third touchdown of the night, and Alabama quarterback Cooper Bateman replaced Jake Coker later in the third quarter. Alabama spent the fourth quarter doing its usual death march to the final whistle and Wisconsin could only muster a garbage-time touchdown late.

1. Jake Coker looks the part. Coker got the nod at quarterback Saturday night, winning a multi-man competition. After an uneven start and early struggles with Wisconsin’s pass rush, the senior settled in, showing increased poise and command of the offense as the game went on.

Coker played the usual game-manager role in Nick Saban’s offense, but he played his role well, throwing for 213 yards and a touchdown on 15-of-21 passing. More importantly, he avoided turnovers, which will always get you on Saban’s good side. Coker still had problems with pressure and long-ball accuracy, but he’s likely shown enough to earn another start next week.

2. Another year, another dominant Alabama RB. After splitting time with T.J. Yeldon last year, Derrick Henry is set to take up the mantle as Alabama’s next great workhorse. Based on Saturday night’s results, the junior is more than capable of following in the footsteps of Mark Ingram, Trent Richardson and Yeldon. Henry shredded the Badgers defense with 147 yards on 13 carries, with his three touchdowns proving to be the difference in the game.

Henry is a bruiser at 6’3, 242 pounds, and has surprising speed for his size, being nigh-unstoppable in the second level. He’s going to be a matchup nightmare for any of Alabama’s opponents and will make life much easier for Coker and company.

3. Wisconsin might miss Melvin Gordon. While Gordon made all the headlines last year, Corey Clement was no slouch, with 949 rushing yards on 6.5 yards per carry. Unfortunately, he didn’t have any answers for Alabama’s stingy defense. Clement finished the night with just 16 yards on eight carries and Wisconsin’s offense never really got out of first gear. The Badgers are still favorites to win the Big Ten West, but the post-Gordon era did not get off to a great start.

Get one roundup of college football stories, rumors, game breakdowns and Jim Harbaugh oddity in your inbox every morning.