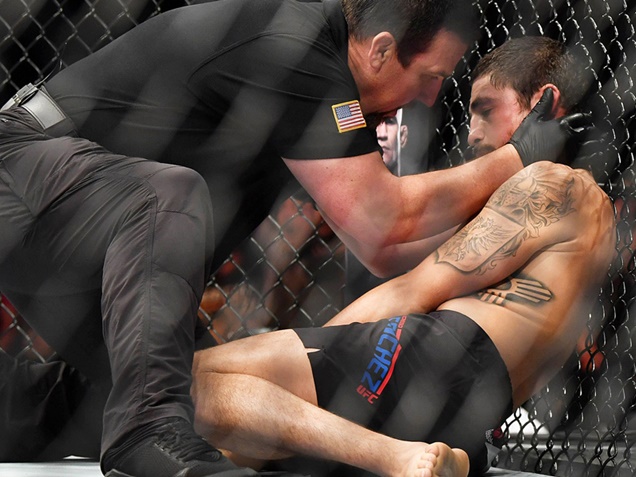 After two years being out of the UFC Al Iaquinta is Back! Over the weekend during the UFC event in Nashville Al Iaquinta brutally Knocked out UFC veteran Diego Sanchez!

One might have thought that Diego Sanchez was going to reign supreme, but thing didn’t land in his favor since Al Iaquinta landed a vicious set of punches. Read on…

LatinoAthlete.com has the results of the Al Iaquinta vs Diego Sanchez fight that ended with the UFC veteran head down on the floor.

It was quick, it was brutal, and in a matter of minutes Al Iaquinta (13-3-1 MMA, 8-2 UFC) landed a round of 1 and 2 on Diego Sanchez (27-10 MMA, 16-10 UFC) and he immediately went down. Diego stood back up struggling to regain his focus, but Al was right back in his face with another big blow. Iaquinta ended up dropping Sanchez, and the fight ended quick. Iaquinta was out of control with happiness that he had won.

What’s next for Al Iaquinta?

Iaquinta has a ton of entertaining match ups set up, but the MMA fighter, but he has had his issues with the UFC that also led to him going for a career change. These says he sells real estate.

As for, Sanchez, he’s been fighting for 15 years, and has taken an incredible amount of damage in the Octagon. That doesn’t mean he’s retiring, even though it appears to be the smartest option. He needs to start focusing on facing fellow vets in a senior circuit type of match up instead of being fed to younger, faster, and stronger contenders.

Watch how quickly this fight is over:

Al Iaquinta knocks out Diego Sanchez in the first round! #UFCNashville https://t.co/xKetEiBfdL

After the fight was over, Diego took to twitter after having a CT scan to assure his fans that he is doing fine.

“To all my fans godbless and I’m all good! A perfect Ct scan”