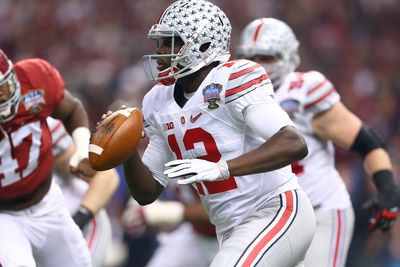 Hey, remember that time Ohio State beat Alabama in the Playoff? Nick Saban sure does. That’s why he debriefed with former Buckeye OC and new Houston head coach Tom Herman after the game, according to Bama DC Kirby Smart:

‘It makes you look at everything,’ Smart said. ‘I’ll tell you the best thing we did, and I give Coach (Nick) Saban a lot credit, we went directly to (Herman). We flew him in. We said, “Hey, look, we want to meet with you. You know us better than anybody. You spent four weeks getting ready for us. What’s our tendencies? What do we do wrong? What do you think?” And he was honest with us.’

Coaches from different teams meet all the time, but getting to tell a defensive mastermind about his defense’s imperfections has got to be pretty satisfying for an offensive coach.

Coast is (mostly) clear. The LA District Attorney decided against felony charges for Diddy related to him swinging a kettlebell during a dustup with a UCLA coach. He could still catch a misdemeanor, but the major hurdle is behind him and he can’t be stopped now.

Paint this black. So, the Rolling Stones played a show in Raleigh, and in search of that most excellent synergy, NC State tried to tie that into a questionable season ticket ad.

We have already thought of your next question, and yes, here are some of the other ideas that NC State could’ve — and probably should’ve — gone with.

Study up. Check out this Football Study Hall piece on how the classic box safety is making a return to modern defenses after being chased out by the introduction of the spread. Maybe you’ll learn something!

Pokes back? Oklahoma State fell apart after huge roster turnover, but Bill Connelly thinks there’s reason to believe the Cowboys are already on the way back to playing a role in the Big 12 title race.

Let’s start over. If we lost anything in the last round of conference realignment, it’s the notion that geography is an important consideration. Our Auburn blog threw out the current format, and redrew the college football landscape with 16 eight-team, geographically sensible conferences.

Tough job. Once you get past the top tier of teams in the Big Ten, the conference boasts some of the toughest coaching gigs in the country. New addition Maryland seems to have landed on its feet, but Rutgers looks like it could be the hardest job in the conference.

WHO YA GOT? Our friends over at Eater ask the question: What is America’s most patriotic dish? I vote burgers, but you have to follow your heart and/or stomach.

Have a festive and accident-free weekend, everyone.