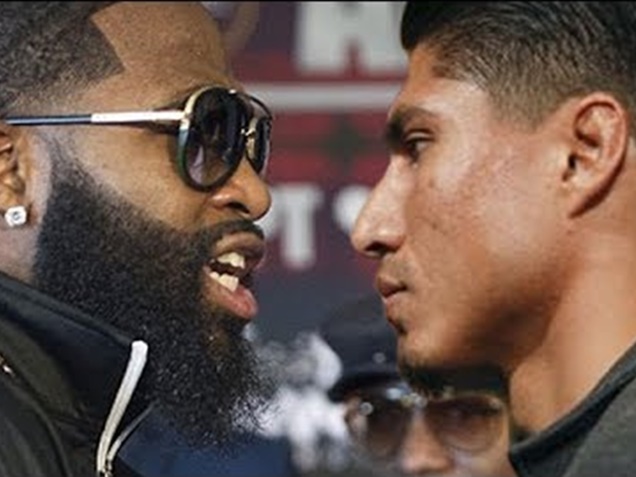 Will there be a Catch-weight fight between Adrien Broner vs. Mikey Garcia? According to reports the two fighters had a preliminary discussions for a catch weight fight in the summer.

Read on if Adrien Broner vs. Mikey Garcia will be going down sometime in the next few months…

LatinoAthlete.com has learned that a fight between former 4 division world champion Adrien “The Problem” Broner and WBC lightweight champion Mikey Garcia would be a epic battle. It is all about setting the time date and monies.

At this point there is no fight set since the fight is far from a done deal. This past week The Problem found himself behind bars for a few days. Adrien Broner was ordered to spend the next three days in jail at a hearing on Monday for an outstanding warrant for disorderly conduct. The incident took place back 2014 at a Kenton County (Kentucky) bar.

Showtime boss Stephen Espinoza believes this is a great fight for summer. Broner and Garcia don’t have a fight on the books yet. Plus, these two facing off would be a big fight in the boxing world gathering much interest.

It was rumored that a target date for a Broner-Mikey Garcia fight could take place on July 29 on Showtime Boxing at the Barclays Center in Brooklyn, New York. But Stephen Espinoza shut that down, so as we said that there is yet to be a fight. Broner, 27, could really use a fight so people can focus back on his craft and not his turbulent personal life. Plus he could really use a win since he lost against Marcos Maidana. he’s been struggling ever since.

“The fight isn’t made, much less a venue determined. I wish it were true. But it’s not.”

When it comes to both fighters, Mikey Garcia is in the better place with his career than Broner. Adrien may be the one to beat, especially since he recently beat light welterweight contender Adrian Granados by a 10 round split decision in February. Although, Garcia might be the best fighter in the lightweight division right now.

This fight is a sure one to see if it comes together.

Michael Irvin had a proctology exam this morning and live-tweeted all...

LatinoAthlete Staff - August 31, 2015
0
"I hate this. I will bring u along." Michael Irvin went to the doctor for his annual checkup today and used the...