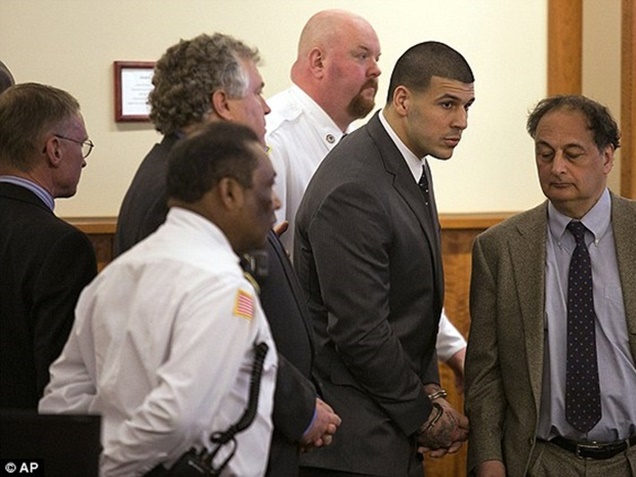 On Friday, Aaron Hernandez verdict was revealed and somehow the jury decided that former tight end for the New England Patriots was NOT GUILTY?

Read on and get all the details on Aaron Hernandez Verdict…

LatinoAthlete.com is a bit in shock at the news of Aaron Hernandez being acquitted for the murders of Daniel de Abreu and Safiro Furtado.

Mind you, Aaron Hernandez is already serving a life sentence for 2013 murder of Odin Lloyd, but the 2012 killings of Daniel de Abreu and Safiro Furtado stood in question up until today.

The ex-NFL tight end quietly wept as the jury read the verdict which revealed that Aaron Hernandez was found not guilty of first-degree murder. However, the only found him guilty of one single charge: unlawful possession of gun. So, Aaron Hernandez can add 4 – 5 years to his life sentence.

After the family of Daniel de Abreu and Safiro Furtado heard the news they were in tears. They were hoping for vindication on the murders of their brothers, friends, and more.

The Prosecutors  solid theory fell apart after the defense had a former club security guard say he was in the club talking with Henandez the majority of the time. He also said that he never saw anyone spill a drink on the former tight end. The prosecutions  theory to convict was based on the two men losing their lives over an alleged spilled drink on the former NFL player who felt they ‘TRIED’ him [disrespected him]. It was then alleged that Hernandez murdered the two men to teach them a lesson after the left a Boston nightclub.

The jury cleared Aaron of the prosecutions theory and believed that Hernandez friend Alexander Bradley was the trigger man. The defense did their job throwing a wrench in the prosecutions case and so Hernandez is back to prison with only one life sentence.

Contributor - February 15, 2017
0
Lookout Nate Diaz, Dustin Poirier is ready to put paws on you for a UFC win. Poirier has created a winning streak taking out...