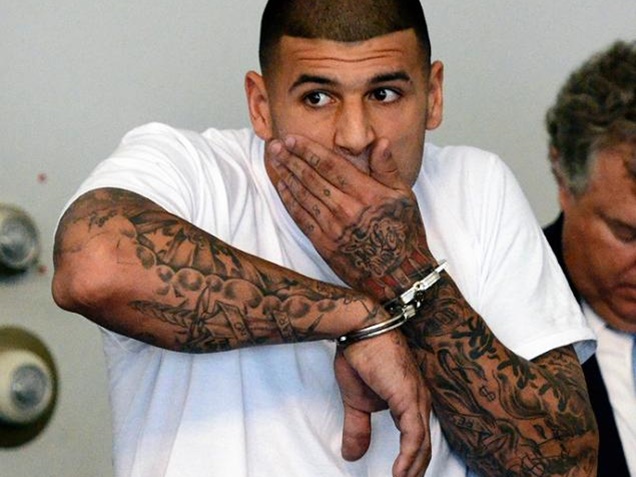 There appears to be evidence on Aaron Hernandez body. The former New England Patriots star tattooed some keep sakes on his body, which tie him to the murders.

Last week Hernandez was identified as gunman in 2012 double homicide. On Tuesday, Aaron Hernandez appeared in court for a pretrial hearing ahead of his double murder trial.

The prosecution had some intriguing new information in used to convict the former NFL tight end. Aaron was the gunmen who orchestrated the killing of 29-year-old Daniel de Abreu and 28-year-old Safiro Furtado in a 2012. 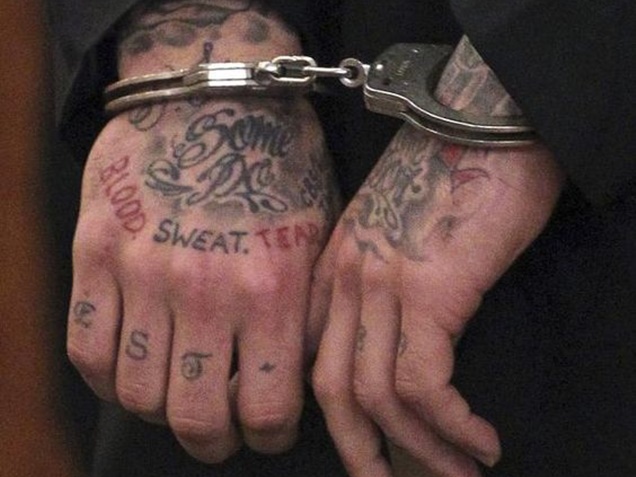 The incident took place in Boston, it was a drive-by shooting. In a sort of confession of his sins, Hernandez inked his body. The prosecution believes that a revolver and “God Forgives” tattoos are key elements that tie him to the murders.

It’s sort of a memorial of his actions, since it was said Hernandez was gang member turned NFL star. The only things are blood in, blood out, so he was allegedly never out.

Do you believe that Aaron Hernandez tattoos are a road map to his crimes?

Was it his confessional? Will the prosecution be able to convict him because of his body art?

The revolver tattoo shows a revolver with five bullets in the chamber with one missing. They feel it represents the shots fired during the drive-by in Boston. As for the “God Forgives” tattoo. It’s written backwards so it can only be seen through a mirror.

Ronald Sullivan, one of Hernandez’s attorneys, called the prosecution’s theory “speculation,” and “inference.” He wants the tattoo theory thrown out of court. He believes it violates Hernandez constitutional rights. Huh? Aaron Hernandez had the world in the palm of his hand. He lost those rights when he killed two men for spilling a drink on him in a club. It was an accident. Those men should not be dead for that.

Ohio State, LSU, FSU off to roaring starts in 2016 recruiting

LatinoAthlete Staff - June 11, 2015
0
Good morning! It's your daily roundup of college football stuff. Click to get this in your inbox every weekday! When people attempt to...